One of my all-time favourite hymnals is Songs of Syon, subtitled “A Collection of Psalms, Hymns, & Spiritual Songs set, for the most part, to their ANCIENT PROPER TUNES,” edited by the Rev. George Ratcliffe Woodward, M.A. My copy, purchased in 1989 (probably in Toronto), is the 4th edition, published in London in 1923, the original edition having come out in 1904. It is an exceedingly comprehensive collection, containing plainsong melodies, metrical melodies of the 13th to 16th centuries, Lutheran chorales, “Old English and Scotch psalm-tunes” and old French psalms and canticles. It is based on the earlier work of Robert Bridges' Yattendon Hymnal. 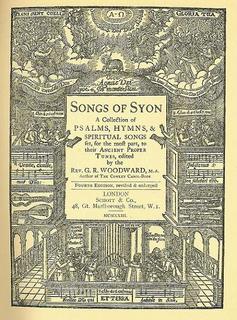 The plainsong texts are generally John Mason Neale’s famous 19th-century translations of the ancient Greek and Latin hymns. These are often rendered in mediaeval musical notation, which, with a little practice, is fairly easily sight-read. The titles of the German hymns are set in blackletter font, perhaps making them appear exotic to an early 20th-century English readership – or should I say “singership”? In his preface to the 4th edition, the Rev. Mr. Woodward felt it necessary to say the following:

If objection be taken to the number of foreign tunes which appear in this Edition, be it remembered that many of our favourite Hymn-tunes. E.g., The Old Hundredth, Luther’s Hymn, Adeste fideles, O Sacred Head surrounded, Now thank we all our God, Sing praise to God who reigns above, are not of English origin. It is confidently believed that many other exotics need only to be transplanted, and they will take equally deep root in the hearts of English-speaking people.

The material is organized at the outset in fairly typical manner, i.e., according to the church calendar. Hence Advent hymns come first, followed by Christmas-even, Christmas-tide, &c. Then come Holy Eucharist, Sundays and Week-days, Evensong, Mattins, Common of Our Lady, Common of Saints, Proper of Saints, &c. Then come sections devoted respectively to Psalms, Hymns and Spiritual Songs.

The Psalms section is of particular interest to me, because the editor put some effort into recovering for the English-speaking church the tunes of the Genevan Psalter, which, apart from a very few, are generally unknown to Anglo-Saxon Christians. Some of the translated texts are by Woodward himself. Here is the first stanza of his rendition of Psalm 150:

Alleluya. Praise the Lord;
Be his holy Name ador’d:
Praise him in the firmament,
Mighty, great and excellent:
In his noble acts revere him:
Praise him on the harp and lute,
Praise him with the trump and flute;
Love, adore, and greatly fear him.

Eight decades later, Woodward’s effort to recover the Genevan tradition appears largely to have fallen short. But his Songs of Syon stands as a monument to the rich liturgical heritage of both eastern and western Christendom. It deserves to be better known than it is.

Unfortunately I myself do not use this volume as often as I would like. My copy is redolent of mildew to which I am, sadly, allergic. Should I attempt to sing directly out of this book, I would have to stop every few bars to blow my nose. I would love to find a much newer reprint with which to replace this.
Posted by David Koyzis at 11:30 No comments: