This concert was put on three years ago by Mission Timothée to mark the 500th anniversary of the beginning of the Reformation. Shortly thereafter it was posted here: Concert "Le psautier huguenot" par la Mission Timothée.

Here is a directory of the songs sung, including nine of the Genevan Psalms: 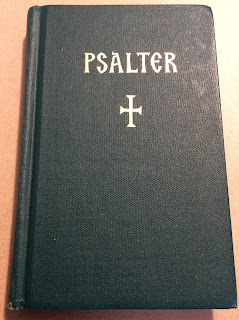 Several years ago I acquired a copy of The Psalter According to the Seventy of Saint David the Prophet and King, a lengthy title describing an English translation from the Greek Septuagint translation of the Psalter for liturgical use. Published in 2007, it was originally released in 1974 and is available in a newer edition also containing the Nine Odes familiar to Orthodox Christians.

The Septuagint was the first translation of what we call the Old Testament into a foreign language, in this case Greek. The Septuagint, often abbreviated to LXX, would have a massive influence among Jews in the Hellenistic world in the centuries before Christ and among Christians, beginning with the apostles themselves. When the New Testament quotes from the Old Testament, virtually all such quotations are from the LXX, which sometimes varies from our extant Hebrew texts.

I recorded this last year and have just posted it on my YouTube channel: Third Mode Melody, by Thomas Tallis. The tune is from Archbishop Matthew Parker's Psalter of 1567 and was originally a setting for Psalm 2. This tune became the basis for Ralph Vaughan Williams' transcendently beautiful Fantasia on a Theme by Thomas Tallis (1910) and Fisher Tull's Sketches on a Tudor Psalm (1971). It is in the phrygian mode, one of the church modes, which means that on the white piano keys one would begin at E and end at E an octave higher without using the black keys. The melody is sometimes called the THIRD TUNE, because it was the third of nine in Parker's collection. It's also called THIRD MODE MELODY, because the phrygian mode is the third, if one begins with the ionian and dorian modes. I believe this simple tune is one of the most haunting pieces of music ever written.

I am still learning and hope eventually to be able to produce more professional-looking and sounding videos. In particular, you will need to increase the volume a bit to hear this. 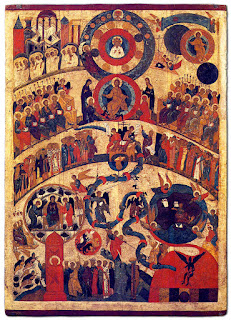 We keep returning to the imprecatory Psalms, as various readers have articulated their own approaches to the "problem" they present for liturgical use. Now Peter Leithart weighs in with the following post at First Things: Sing the "Mean" Psalms. An excerpt:

Singing the “mean” psalms is thus part of the church’s mission. These psalms arouse a hunger and thirst for justice, as we take up the prayers of the destitute as our own. They expand the scope of our prayers. We may not be under threat, but these psalms keep before us the daily dangers of persecuted brothers and sisters. Imprecatory psalms ground us in the real world, counteracting our instinct for over-spiritualized, anodyne, Pollyannaish piety. They’re a form of church discipline, as we ask Jesus to uproot liars and predators from his field, the church.

In the course of the article, Leithart cites my friend Trevor Laurence, who has published my own writings at Cateclesia Forum, which just yesterday posted this: The Virtual Illusion: Social Media’s Uneasy Relationship with Real Community.

The following performance of Genevan Psalm 150 uses the arrangement of Paschale de L'Estocart and my own English text, albeit an earlier form of the text before I revised the last two lines of the second stanza.

A lovely performance indeed. Unfortunately, the person who made the recording, Stephanie Martin, neglected to credit the author of the text. I contacted her several years ago and asked her to do so, but she obviously did not, not even on her YouTube channel. Perhaps the next step is to contact Warner Chappel Production Music, which published the recording. 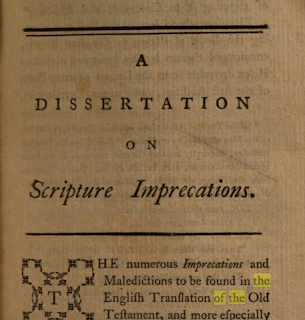 Google Books has posted a copy of Benjamin Williams' Book of Psalms as Translated, Paraphrased, or Imitated by some of the most eminent English Poets, which include Nahum Tate and Nicholas Brady, whose "New Version" Psalter was published in 1696, and the great hymn writer Isaac Watts. This scanned volume was published in 1781 in Salisbury, England, and even includes the price of four shillings.

What is notable about this volume is a preface by the editor titled, "A Dissertation on Scripture Imprecations," undertaking to grapple with the darker texts in which the psalmist calls God's wrath down on his enemies. Williams takes a quite different approach to what I have written here: GOD AS JUDGE: PRAYING THE IMPRECATORY PSALMS. He believes that the imprecations in the Psalms are largely the work of faulty translators of the original Hebrew text, in which the imperative mood is routinely substituted for the future tense. The original authors were simply predicting what would happen to the wicked rather than wishing it upon them. I am no expert in Hebrew, but given that this was written nearly two and a half centuries ago and that no credible biblical scholars that I am aware of seem to have adopted this interpretation since then, we are probably justified in viewing this as an interesting example of someone struggling with texts that made him uncomfortable.

Not surprisingly, then, Williams used Watts' abbreviated and christological versification of Psalm 109, omitting the lengthy imprecations altogether and ending thus:

Their Malice rag'd without a Cause,
Yet with his dying Breath
He pray'd for Murd'rers on his Cross,
And blest his Foes in Death.

Let not his bright Example shine
In vain before our Eyes;
May we like him to Peace incline,
And love our Enemies.

Posted by David Koyzis at 12:09 No comments:

Here is one more Psalm recorded by Simon Caneparo: Psalm 21 - Domine in fortitudine tua (In Your strength, O LORD):

Posted by David Koyzis at 11:31 No comments:

We badly need a translation from Hungarian of what looks to have been a fantastic lecture: Dr. Vas Bence: Genfi zsoltárok - Kórus- és lantfeldolgozások a XVI. században. Translation: Dr. Bence Vas: Geneva Psalms - Choral and Lute arrangements in the 16th century. Even if you cannot understand Hungarian, you can still enjoy the performances of Psalms 6, 5, 143, 77, 40, and 80 for choir, vocal solo, and guitar.

Posted by David Koyzis at 13:33 No comments:

During a visit to New Saint Andrews College in 2018, I was privileged to meet and spend time with musician and composer David R. Erb, who writes through-composed renditions of the Psalms. Here is his version of Psalm 43:

Posted by David Koyzis at 11:18 No comments:

Here is another beautiful rendition of the first Psalm: Blessed is the man. Oddly, it ends on the fifth rather than the tonic.

Posted by David Koyzis at 12:45 No comments: