This was posted on the Psalmii Cântați YouTube channel a year ago. It's a Romanian-language versification of Psalm 150 set to the Genevan tune, as arranged by The Psalm Project in the Netherlands. Sung by Anca, wife of Eugen Tămaș: 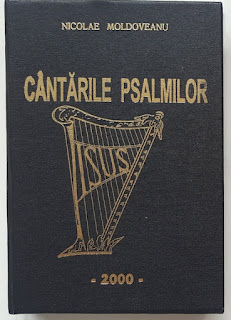 Yes, even the Christians of Romania, a largely Orthodox Christian country whose people speak a Romance language, sing metrical psalms. At right is a copy of their psalter, CÂNTĂRILE PSALMILOR, published by Editura Comorile Harului (Treasures of Grace Publishing), in 2000. As far as I can determine, it is made up largely of original texts set to verse by Traian Dorz and music composed by Nicolae Moldoveanu, famed church musician who, during the era of communist persecution, shared a prison cell with Richard Wurmbrand. This year marks the centenary of Modoveanu's birth. He died at a good old age in 2007.

Performances of these Psalms can be found at the YouTube channel, Psalmii Cântați, which was set up by Eugen Tămaș. Here is the description of the channel translated into English by Google:

The Ecstatic Companionship Of The Psalms 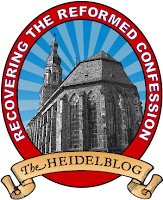 I have been participating in a discussion on The Heidelblog below a post titled, The Ecstatic Companionship Of The Psalms. The post itself consists of a passage from Diarmaid MacCulloch's Reformation: Europe’s House Divided 1490–1700 (Penguin, 2004), 307–09:

The metrical psalm was the perfect vehicle for turning the Protestant message into a mass movement capable of embracing the illiterate alongside the literate. What better than the very words of the Bible as sung by the hero-King David? The psalms were easily memorized, so that an incriminating printed text could rapidly be dispensed with. They were customarily sung in unison to a large range of dedicated tunes (newly composed, to emphasize the break with the religious past, in contrast to Martin Luther’s practice of reusing old church melodies which he loved). The words of a particular psalm could be associated with a particular melody; even to hum the tune spoke of the words of the psalm behind it, and was an act of Protestant subversion. A mood could be summoned up in an instant: Psalm 68 led a crowd into battle, Psalm 124 led to victory, Psalm 115 scorned dumb and blind idols and made the perfect accompaniment for smashing up church interiors. The psalms could be sung in worship or in the market-place; instantly they marked out the singer as a Protestant, and equally instantly united a Protestant crowd in ecstatic companionship just as the football chant does today on the stadium terraces. They were the common property of all, both men and women: women could not preach or rarely even lead prayer, but they could sing alongside their menfolk. To sing a psalm was a liberation—to break away from the mediation of priest or minister and to become a king alongside King David, talking directly to his God. It was perhaps significant that one of the distinctive features of French Catholic persecution in the 1540s had been that those who were about to be burned had their tongues cut out first.

The Heidelblog is the creation of R. Scott Clark.

Posted by David Koyzis at 09:56 No comments: