Posted by David Koyzis at 07:45 No comments:

Huckaby on the psalms

Chuck Huckaby has expanded his earlier post on the Genevan Psalms for The Worldview Church: Reviving Personal Devotion through use of the Genevan Psalms. In the course of this article he is kind enough to mention my own work in this area.
Posted by David Koyzis at 23:10 No comments:

I have recently been made aware of The Psalm Project, a group of young Christian musicians in the Netherlands who are rendering the Genevan Psalms in contemporary form. Here is a medley of their efforts below, which are quite compelling:


Quite honestly, I do not recommend the microphoned performance style for liturgical use, as it calls too much attention to the singers, whose voices unduly dominate rather than support those of the congregation. Nevertheless, taken as performance music, these pieces are quite nice and worth listening to.

Update: How would The Psalm Project render the imprecatory psalms such as the closing verses of Psalm 137? Are their contemporary versions of the Psalms capable of accounting for the quite varying spiritual and emotional range of the collection? I will be interested to follow their efforts to see how, or whether, they will treat these.
Posted by David Koyzis at 16:10 No comments:

The following Portuguese-language version of Psalm 2 is set to the Genevan tune and begins the same as this CBS rendition, but from there the two texts part ways.

With the gracious permission of Josef du Toit, I have now posted the Afrikaans-Geneefse Psalmboek on our server with a link from the links page. Heart-felt thanks to Mr. du Toit.
Posted by David Koyzis at 07:05 No comments:

The Psalms in Brazilian Portuguese

A Brazilian acquaintance, Guilherme de Carvalho, has drawn my attention to a Portuguese-language article by Lucas G. Freire, titled A igreja deveria cantar mais os salmos, translated into English as The church should sing psalms more. Freire is a member of the Brazilian Committee on Psalmody (Comissão Brasileira de Salmodia, or CBS), which is undertaking to versify all 150 Psalms in the Portuguese language. The fruit of these efforts can be found at Saltério Reformado. Those versifications with Freire's name at the bottom are first drafts. Those attributed to CBS are final drafts. The intention is to have 150 Psalms set to the Genevan tunes and 150 Psalms set to more familiar hymn tunes. The collection should come out sometime next year. We wish Freire and the entire committee God's guidance and blessings as they undertake this important work for his glory.
Posted by David Koyzis at 12:53 5 comments:

Chuck Huckaby, pastor of St. Andrews Church, Lawrenceburg, Tennessee, recommends a number of resources related to the Genevan Psalter, including the forthcoming new Canadian Reformed psalter: Updated Anglo Genevan Psalter Unveiled. Although this collection is known as both the Book of Praise, a title used since at least 1897 for the Presbyterian Church in Canada's psalter and hymnal, and Anglo-Genevan Psalter, a title given to the collection published in 1556 in Geneva by English clergy exiled during the reign of Queen Mary, no one is likely to confuse the new psalter with either of these earlier works. A preview can be found here.
Posted by David Koyzis at 21:41 No comments:

The Psalms in Afrikaans 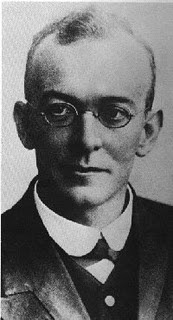 The Afrikaners of South Africa have their origins in a trading post established by the Dutch East India Company in 1652 at the Cape of Good Hope. The original Dutch settlers were joined by subsequent migrations from France and Germany, as seen in the surnames of many Afrikaners. For centuries the Reformed Christians who constituted the majority of Afrikaners read from the Dutch Statenvertaling Bible and sang the Genevan Psalms in Dutch. However, in the early 20th century the poet Jakob Daniël du Toit, better known by his latinized pen name Totius (photograph at right), versified the Psalms in Afrikaans, the Dutch-descended language used in everyday speech. His collection, commissioned and supervised by the Dutch Reformed Churches, was published in 1936, thereby providing this liturgical resource in Afrikaans for the first time.

I have just received a copy of the most recent Afrikaans-language metrical psalter from one Josef du Toit (no relation), who has himself done work on revising Totius' original versifications. I look forward to exploring it more thoroughly in the near future. In the meantime, here is a Reformed congregation in Franschhoek, Western Cape, South Africa, singing Psalm 81:

Posted by David Koyzis at 11:00 No comments: