Nahum Tate: reviser of Shakespeare and versifier of Psalms 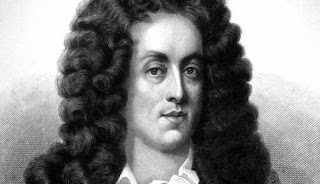 Last week our family saw King Lear at the Stratford Festival here in Ontario. This is undoubtedly the Shakespeare play I know best, having seen more than one version of it over the decades. Everyone knows that it's a tragedy, although the Immortal Bard's source material apparently had the king's youngest daughter inheriting his realm at the end. While researching the play, I discovered something fascinating that's relevant to this blog: What did Nahum Tate do to Shakespeare?

The son of a clergyman, Nahum Tate was an Irish poet and lyricist. As well as penning his own works, Tate turned his hand to 'adapting' a number of Elizabethan dramas, including some of Shakespeare's. . . .

Tate's version of King Lear, titled The History of King Lear, is drastically different from Shakespeare's. For one thing, it is not a tragedy. Tate felt, and many agreed with him, that the ending of King Lear was just too sad to bear. So, he replaces Lear on the throne and doesn't kill off Cordelia.


In addition to adapting Shakespeare's plays, Nahum Tate collaborated with Nicholas Brady to produce the Tate and Brady "New Version" metrical psalter (1696), the second psalter to be used in England after the Sternhold and Hopkins, and the last to be used before someone decided that metrical psalmody was best left to the Scots.
Posted by David Koyzis at 09:45 No comments: