Genfi Zsoltar: the Psalms in Hungarian 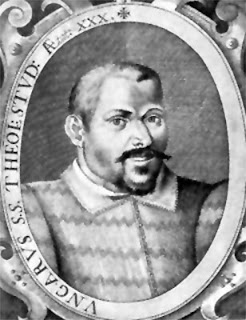 I have posted a link on both my bibliography and links pages to a pdf file of the Psalms in Hungarian. These versifications were the work of Albert Szenci Molnár (1574-1639), or Szenci Molnár Albert. (In the Hungarian language the "Christian name" comes last with the family name coming beforehand. In Molnár's case Szenci refers to his birth village of Senec, near the city of Pozsony, now Bratislava, Slovakia. A not uncommon family name, Molnár means "miller" and obviously refers to a forebear's occupation.)

A Reformed pastor, Molnár travelled widely during his life, visiting and studying in a number of European centres of the Reformation. His metrical translation of the Psalms was inspired by the German-language Lobwasser Psalter and was published in Herborn in 1607. (The Reformed Christian legal theorist Johannes Althusius had published his Politics in Herborn a few years earlier but had moved to Emden before Molnár's arrival.) He died in Kolozsvár in Hungarian Transylvania, now Cluj-Napoca, Roumania.

It can be found here.
Posted by David Koyzis at 10:40 No comments: