How many Psalms of David? Qumran's answer 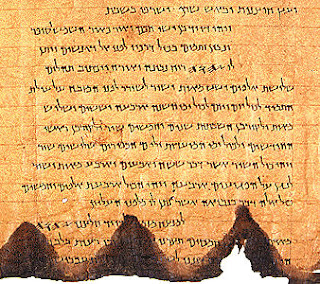 The entire canonical collection making up the biblical Psalter claims in some fashion the authorship of David, the revered king and founder of the Judahite dynasty that would eventually give us Jesus Christ, "great David's greater Son." This suggests, not that David literally composed every Psalm, many of which (for example, 79, 80, and 137) address conditions and events long after his death. It suggests rather that he initiated the project of creating a collection of hymns for God's people which continued for centuries afterwards until the exile and possibly later.

One of the texts uncovered at Qumran (11Q5/11QPsa) asserts that David wrote many more psalms than those that would come to be included in the Bible:

The Dutch composer Jan Pieterszoon Sweelinck (1562-1621) composed arrangements for all 150 of the Genevan Psalm tunes. The Gesualdo Consort has posted many of these on its YouTube channel: Sweelinck: The Complete Psalms. Here is one of those arrangements of Psalm 92 below:

Released last year, the recording is available from iTunes, Amazon.com, and the usual online vendors.

Posted by David Koyzis at 12:05 No comments:

Several years ago I obtained a copy of Saint Dunstan's Plainsong Psalter, containing all 150 Psalms set to chant tones along with additional material. It's a beautifully laid-out volume enabling us to sing the Psalms in a particularly ancient way. I've discovered a YouTube channel that features Sarah James singing all of the Psalms in this collection: Saint Dunstan's Plainsong Psalter. Here is the first Psalm below:

Posted by David Koyzis at 09:51 No comments:

Let the People Praise: The Enduring Legacy of the Genevan Psalter

Last wednesday afternoon, 18 May, I delivered this lecture at Calvin University, Grand Rapids, Michigan, titled: "Let the People Praise: The Enduring Legacy of the Genevan Psalter." This was to mark the 40th anniversary of the H. Henry Meeter Center for Calvin Studies. I was pleased to see so many familiar and unfamiliar faces there. For those unable to attend, here is a recording of the lecture.

My lecture at Calvin University took place on wednesday, 18 May. I will post a link to the lecture when the Meeter Center posts it. For now I have posted a portion of the Psalmfest that took place that evening in the chapel of Calvin Theological Seminary. The assembled congregation is singing Genevan Psalm 6 as found in Psalms for All Seasons.

Here is the programme for the Psalmfest: 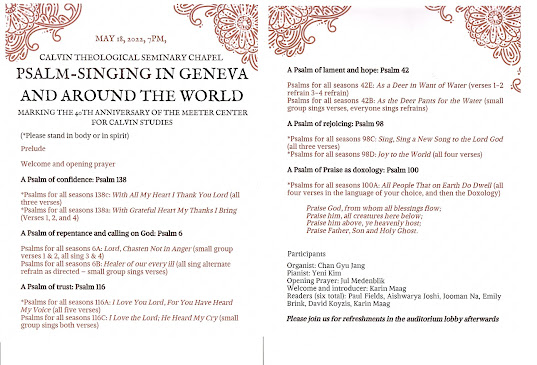 Posted by David Koyzis at 10:28 No comments:

Here is a reminder of tomorrow's lecture sponsored by the H. Henry Meeter Center for Calvin studies: Meeter Center 40th Anniversary - Lecture: The Genevan Psalms And Their Significance. It will take place at 15:30 UTC-04 (3.30 pm EDT), wednesday, 18 May 2022, at the Meeter Center Lecture Hall, Hekman Library, at Calvin University, Grand Rapids, Michigan, USA. From the website: "Join us for this special lecture featuring Dr. David Koyzis (Global Scholars Canada), who has recently completed a new versification of all 150 Genevan Psalms."
Posted by David Koyzis at 09:28 No comments:

The Sound of the Psalms 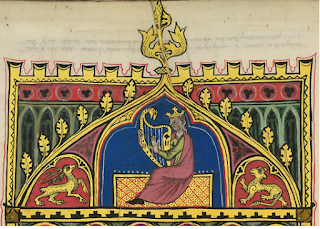 First Things' contributing editor Mark Bauerlein interviews James M. Hamilton, Jr., about his book, Psalms Volume 1: Evangelical Biblical Theology Commentary, on this podcast: The Sound of the Psalms. Hamilton takes a canonical approach to the Psalter, arguing that it is no mere collection of praises arranged haphazardly. Rather, the five books of the Psalter trace the history of redemption from the Davidic monarchy through exile and return, culminating in the concluding grand doxologies that represent the consummation of the long story of our salvation in Jesus Christ. It is not incidental that a majority of the Psalms attributed to David occur in the first two books, the second of which closes with "The prayers of David, the son of Jesse, are ended." Standard scholarly interpretation has it that this sentence was an editorial insertion closing an early collection of the psalms to which others were added later. Hamilton argues instead that this signifies that the narrative flow of the Psalter has moved beyond the Davidic episodes to a later stage in the redemptive story. The interview runs to just over half an hour. The book is available from Lexham Academic.

Genevan Psalms for the Twenty-first Century: The Story of a Project

The May/June issue of The Outlook carries my second article on the Genevan Psalter, following up on my first instalment in the January/February issue. That earlier article introduced the Psalter and told the story of how it came to be. The second article tells the story of my own project to set the Psalms to verse according to their proper Genevan melodies. As far as I can tell, this article is not posted online either, so you will have to locate a print copy or take out a subscription. 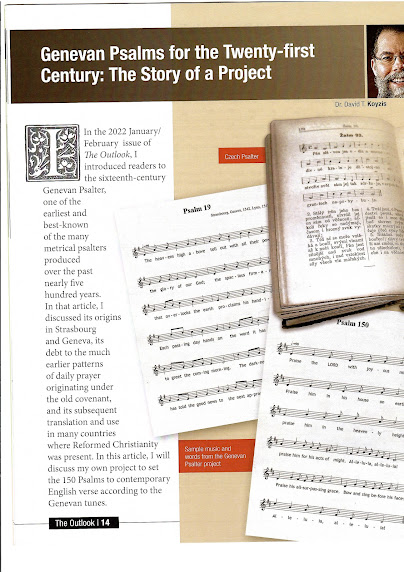 Posted by David Koyzis at 15:39 No comments:

This is obviously not a metrical Psalm, but a Greek Orthodox rendering of Psalm 79, or 78 by Septuagint numbering. In the Orthodox world the singing of this Psalm is associated with lament over the fall of Constantinople to the Ottoman Turks on tuesday, 29 May 1453. This particular video includes an English translation of the text.