We Praise Thee, O God: a literary analysis of the Te Deum 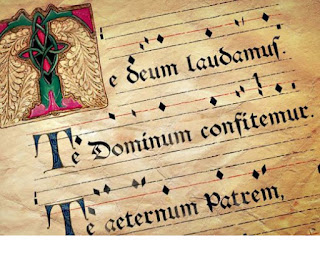 A few weeks ago I began volunteering at a local food bank. In between conversing with clients and manning a literature table for the chaplain, I discovered there is time for other things. As I had neglected to bring anything to read, I decided to undertake a literary analysis of the ancient Te Deum, a 4th-century Latin hymn traditionally sung on great occasions of thanksgiving. As I typically pray this during my daily prayer regimen, I mostly know it by heart. Variously ascribed to Sts. Ambrose and Augustine and to Nicetas of Remesiana, its authorship is otherwise unknown.

Now I freely admit that, as an academic political scientist, I am by no means an expert in literary analysis beyond the basics. However, I have noticed a few things about the Te Deum that I thought worth passing along.