More from Sing a New Song


I couldn't resist reposting the remainder of the videos from the Free Church of Scotland's website. They deserve a wide distribution amongst those who love to sing the Psalms.


The Free Church of Scotland has posted a number of highly appealing videos featuring personal testimonies of God's grace, choral/congregational renditions of the Psalms, and beautiful footage of the Scottish landscape. These are excerpts from a DVD titled, Sing a New Song, available from the Free Church Bookshop.

Posted by David Koyzis at 16:12 No comments:

New Zealand sings to the Lord 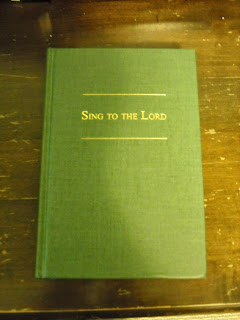 A few days ago I received a copy of the new psalter and hymnal published by the Reformed Churches of New Zealand, titled, Sing to the Lord. The RCNZ appears to have only 19 congregations, which makes it all the more impressive that such a small denomination should produce so high quality a collection. It is similar in feel to the various editions of the Christian Reformed Church's Psalter Hymnal, with the psalter texts based largely on the 1912 Psalter of the former United Presbyterian Church in North America.

Unlike especially the grey Psalter Hymnal and the Dutch Liedboek voor de Kerken, Sing to the Lord does not have a separate section for Bible songs or canticles. These are included in the second section, titled simply "Hymns" and are arranged topically. For example, my own text, Christ Who Is in the Form of God, based on Philippians 2:6-11, is included under the subsection "God the Son." Nor is there any effort to organize the hymns according to the church year. Nevertheless, there is an Index of Bible Songs (813-814), as well as a Topical Index (815-842) in which the feasts and seasons of the ecclesiastical calendar are matched with appropriate psalms and hymns.

At the beginning of the volume is a section containing the Lord's Prayer, the three Ecumenical Creeds and the first question and answer of the Heidelberg Catechism. The Reformed confessions are absent, as are the various liturgical forms found in similar collections serving the churches. This volume is already fairly hefty, so perhaps these resources are found in a separate volume.

To renew creation: Psalm 104 and the promise of Pentecost


There is an ancient tradition tying Psalm 104 together with the celebration of Pentecost, the day the church celebrates the sending of the Holy Spirit, an event recorded in Acts 2:1-36.

Psalm 104 begins exactly the same way as the immediately preceding psalm: “Bless the LORD, O my soul!” And like Psalm 103, it too ends with the same summons to praise the LORD. In between the opening and closing verses, however, the two psalms follow different paths.

Psalm 103 appears to have been written for a particular occasion, prompting the writer to offer thanksgiving to God. Perhaps the psalmist had recovered his health after suffering illness (verses 3-5). Or he may have received forgiveness for a sin committed and was grateful to God for his unexpected and unmerited mercy (verse 10). In the Reformed churches Psalm 103 is often sung as a thanksgiving psalm after the reception of the Lord’s Supper, a usage dating back to 16th-century Geneva.

By contrast, Psalm 104 is a more general hymn of praise to God as creator. At least one commentator has noted the similarities between this psalm and the first chapter of Genesis, which portrays God calling into being the sky, the sea and the land, and then filling these places with the appropriate living creatures. Yet while Genesis 1 sees creation as a completed work followed by Sabbath rest, the one-hundred fourth Psalm views it from a different angle: here creation is ongoing, reminding the reader that everything that exists is utterly dependent on God, whose faithful care for what he made is continual.

Remarkably, human beings are not explicitly mentioned as products of God’s creative activity but are mentioned almost in passing at several points. For example: “He makes grass grow for the cattle, and plants for people to cultivate—bringing forth food from the earth: wine that gladdens human hearts, oil to make their faces shine, and bread that sustains their hearts” (14-15).

What then does all this have to do with the Holy Spirit? The single reference comes in verse 30: “When you send your Spirit, they are created, and you renew the face of the ground.” But is that one verse sufficient to make this a Pentecost psalm? The church in its wisdom has said yes, and for good reason.

To be sure, the gift of the Holy Spirit, as recounted in Acts, is bestowed initially on the apostles and is manifested in their sudden ability to communicate the gospel in the multiple languages of the people present in Jerusalem that day. Yet Romans 8:22-24 tells us that “the whole creation has been groaning as in the pains of childbirth right up to the present time. Not only so, but we ourselves, who have the firstfruits of the Spirit, groan inwardly as we wait eagerly for our adoption to sonship, the redemption of our bodies. For in this hope we were saved.” Our redemption as God’s children does not remove us from creation; it is, rather, bound up with the renewal of the entire creation, of which we are part. The cosmic scope of redemption in Jesus Christ and renewal in the Holy Spirit is beautifully set forth in Psalm 104, which is thus fittingly sung on Pentecost.

To mark this occasion in the church calendar I here present readers with two stanzas of my own recently-completed metrical versification of this psalm, to be sung to the proper Genevan tune, covering verses 27-34 in the standard English translations:

All creatures look to you for sustenance;
and in due course you give them nourishment.
What you bestow on them they gather gladly;
your open hand has given to them freely.
They are in terror when you hide your face;
when you deprive of breath, they leave this place.
You send your spirit to renew creation
and to the earth bring life and your salvation.

Now may the glory that the LORD displays
endure for ever and for endless days.
May he delight in what his hands have fashioned,
who sparks volcanoes and the earthquake's passion.
All of my life I'll sing to praise the LORD;
while I draw breath, my God will be adored.
May he be pleased to hear my meditation,
for in the LORD I find my jubilation.


Let us then echo in our hearts and with our voices the final words of this psalm: “Praise the LORD!”

David T. Koyzis teaches politics at Redeemer University College and is the author, most recently, of We Answer to Another: Authority, Office, and the Image of God (Pickwick Publications, 2014). This article appeared in the 9 June issue of Christian Courier under the general title, "Principalities & Powers".
Posted by David Koyzis at 06:00 No comments: