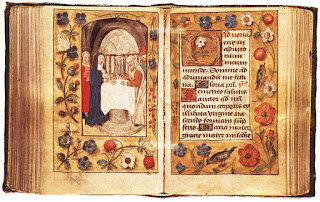 It is good to get another perspective on those psalms that call down God's wrath on his enemies. This one is by a Roman Catholic priest who questions his church's abridgement of the biblical Psalter as used in the daily cycle of prayer: Is It Time to Restore the Full Psalter to the Liturgy of the Hours? An excerpt:

Prior to the publication of the Liturgy of the Hours, Pope Paul VI decreed that the imprecatory psalms be omitted. As a result, approximately 120 verses (three entire psalms (58[57], 83[82], and 109[108]) and additional verses from 19 others) were removed. The introduction to the Liturgy of the Hours cites the reason for their removal as a certain “psychological difficulty” caused by these passages. This is despite the fact that some of these psalms of imprecation are used as prayer in the New Testament (e.g., Rev 6:10) and in no sense to encourage the use of curses (General Instruction # 131). Six of the Old Testament Canticles and one of the New Testament Canticles contain verses that were eliminated for the same reason.

Many (including me) believe that the removal of these verses is problematic . . . . [I]t is troubling to propose that the inspired text of Scripture should be consigned to the realm of “psychological difficulty.” Critics assert that it should be our task to seek to understand such texts in the wider context of God’s love and justice. Some of the most teachable moments come in the difficult and “dark” passages. Whatever “psychological difficulty” or spiritual unease these texts cause, all the more reason that we should wonder as to the purpose of such verses. Why would God permit such utterances in a sacred text? What does He want us to learn or understand? Does our New Testament perspective add insight?

My new acquaintance, the Rev. Brian Wright, has recently posted this video of his musical setting of Psalm 17 from the Book of Psalms for Worship: Let Justice from Your Presence Come.

Wright has also posted a website devoted to his Anatomy of the Soul project, including opportunities to acquire CD recordings and sheet music. Do take a look.

Posted by David Koyzis at 10:45 No comments:

I have now placed in the right sidebar a link to a new page: GOD AS JUDGE: PRAYING THE IMPRECATORY PSALMS. This is a slight adaptation of last month's post: God as Judge: Do we still pray the imprecatory Psalms? I decided to devote a page to this topic because the subject is basic to our understanding of the Psalter as a whole. Moreover, because we confess that Scripture is the Word of God, we need better to understand God's purposes in inspiring the biblical authors to write these passages.

Posted by David Koyzis at 10:45 No comments:

Back in 1993 my sister Yvonne and I recorded this metrical version of Psalm 95, whose text I set to verse to be sung to the melody of the ancient Cypriot song T'ai Yiorkou. Recorded in St. Barnabas Church, Glen Ellyn, Illinois. The images in the video are of various places around Cyprus and of psalm-related material.

Posted by David Koyzis at 07:57 No comments:

Melodies for the Polish Psalter

The following appears to be from an old long-play vinyl record of Kochanowski's and Gomółka's collection: Psalmy - Mikołaj Gomółka - Chór Stuligrosza. Performed by the Boys and Men's Choir of the Poznań Pharharmonia under the direction of Stefan Stuligrosz.

We've not sung this Psalm in our church in some time, but it is a traditional entrance hymn for the Lord's Supper in Scotland, where our congregation finds its roots:

Posted by David Koyzis at 07:35 No comments:

If you use the title of Psalm 29 in Polish as a keyword when searching YouTube, you will find several performances of Kochanowski and Gomółka's version of this psalm.The following video is highly unusual. It's a rock version from an album called Pospolite Ruszenie. Admittedly, it will not be everyone's cup of tea, but it is testimony to how deeply embedded this song is in the Polish musical repertoire.

There. That's done. Now here's one that many of us will likely prefer: Mikołaj Gomółka (XVI w.) - Nieście chwałę mocarze, performed in the Ukrainian city of Lviv at the 13th Early Music Festival:

Posted by David Koyzis at 12:10 No comments:

Here is another performance of Psalm 29 from the Polish David's Psalter, arranged by Adam Cichocki and performed by the Exaudi Chamber Choir. There is a bit of interference from a cell phone ring tone at one point. Judging by the number of performances of this piece on YouTube, it would seem that this is the best known and best loved of Kochanowski and Gomółka's Polish metred psalms.

Posted by David Koyzis at 11:49 No comments: