Our family are currently members of a church that sings the psalms some of the time, if less than I myself would like to see. Those psalms that we do sing come in large measure from the Scottish Psalter of 1650 or a related tradition. One of the principal characteristics of metrical psalmody in the British Isles is its regular metres.

The most common metre in use is called, unsurprisingly, common metre (CM) or ballad metre, whose structure is as follows: 8.6.8.6 iambic. What this means is that it consists of four lines, one and three having eight syllables and two and four having six. Iambic means that each line begins on an unstressed or feminine syllable. When I first began writing metrical psalms some three decades ago, I did so, almost instinctively, in common metre, seemingly unaware of alternatives. So thoroughly is this metre bred in the bones of English-speaking Christians that it is nearly second nature to them.

Not quite as common, but still familiar to English-speaking Christians, are long metre (LM) and short metre (SM), which are structured respectively as follows: 8.8.8.8 iambic and 6.6.8.6 iambic. All three of these, of course, can be doubled to make for a longer stanza. 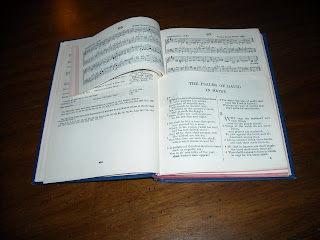 One of the reasons why these three metres are so popular in the English-speaking world is that they are well suited to the language, whose words have fewer feminine endings than some other languages, including French, Dutch and German. Due to the absence of noun cases, which dropped out of use centuries ago, English is not the easiest language in which to write poetry, primarily because word order is so inflexible — one reason why the versifications in the Scottish Psalter sound so awkward to our ears.

More than two decades ago I was given a copy of the 1929 edition of the Scottish Psalter by my late friend Stan Hall. As can be seen in the photograph (above right), it is a split-page edition in which texts and tunes can be easily mixed and matched. This very possibility is, of course, entirely due to the regular metres employed. Any common metre text can be paired with any common metre tune. In this there are parallels with Anglican chant, in which a small number of chants can be matched to virtually any text, although the reason in that case is precisely the opposite, namely, the lack of metre in the BCP psalter. 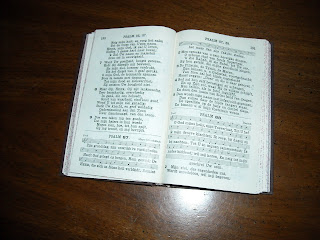 As those acquainted with my website know, I myself prefer the Genevan tunes, which strike a marvellous balance between simplicity and complexity, vividly conveying the unique message of each psalm and imprinting it in the heart of the believer. Indeed whenever I hear reference to a specific psalm or hear that psalm read, even in prose translation, the proper Genevan melody inevitably pops into my head. May God continue to be glorified in these sturdy tunes, nearly 450 years after they were first sung.
Posted by David Koyzis at 03:03 2 comments:

I have just posted several more videos to the video section of my website, including the following of a congregation singing Psalm 124 at l'Église Saint-Pierre in Geneva, the church John Calvin himself preached at during his stay there. I was privileged to visit this church during my first trip to Europe more than 30 years ago.

This choral arrangement of Psalm 128, sung by the Vocalconsort Berlin is especially beautiful and worth listening to. The German text is from the Lobwasser-Psalter of Ambrosius Lobwasser (1515-85).

Posted by David Koyzis at 09:44 No comments: