Peculiar 'penalty' no penalty at all

I'm sorry, but this is no punishment. Indeed it amounts to a "lite" version of the Liturgy of the Hours, which has been practised in the monasteries for the better part of two millennia. Many nonmonastic priests observe this anyway. By God's grace, it's just possible that, at the end of the three months, he will decide to continue a discipline that will have become part of him.
Posted by David Koyzis at 11:11 No comments:

The decline of Psalms in the liturgy

This is a sad account of the decline of Psalms in the western liturgy taken from the 1913 edition of the Catholic Encyclopedia under the entry for "Gradual". I have taken the liberty of breaking it up into paragraphs and deleting the source citations for easier reading.

Gradual, in English often called Grail, is the oldest and most important of the four chants that make up the choir's part of the Proper of the Mass. Whereas the three others (Introit, Offertory, and Communion) were introduced later, [to] fill up the time while something was being done, the Gradual (with its supplement, the Tract or Alleluia) represents the singing of psalms alternating with readings from the Bible, a custom that is as old as these readings themselves. Like them, the psalms at this place are an inheritance from the service of the Synagogue. Copied from that service, alternate readings and psalms filled up a great part of the first half of the Liturgy in every part of the Christian world from the beginning.

Originally whole psalms were sung. In the "Apostolic Constitutions" they are chanted after the lessons from the Old Testament: "The readings by the two (lectors) being finished, let another one sing the hymns of David and the people sing the last words after him." This use of whole psalms went on till the fifth century. St. Augustine says: "We have heard first the lesson from the Apostle. Then we sang a psalm. After that the lesson of the gospel showed us the ten lepers healed."

These psalms were an essential part of the Liturgy, quite as much as the lessons. "They are sung for their own sake; meanwhile the celebrants and assistants have nothing to do but to listen to them." They were sung in the form of a psalmus responsorius, that is to say, the whole text was chanted by one person — a reader appointed for this purpose. (For some time before St. Gregory I, to sing these psalms was a privilege of deacons at Rome. It was suppressed by him in 595.) The people answered each clause or verse by some acclamation. In the "Apostolic Constitutions" they repeat his last modulations.

Another way was to sing some ejaculation each time. An obvious model of this was Ps. cxxxv [Hebrew: 136] with its refrain: "quoniam in æternum misericordia eius" ["for his mercy endures for ever"]; from which we conclude that the Jews too knew the principle of the responsory psalm. . . . It appears that originally, while the number of biblical lessons was still indefinite, one psalm was sung after each.

When three lessons became the normal custom (a Prophecy, Epistle, and Gospel) they were separated by two psalms. During the fifth century the lessons at Rome were reduced to two; but the psalms still remain two, although both are now joined together between the Epistle and Gospel, as we shall see. Meanwhile, as in the case of many parts of the Liturgy, the psalms were curtailed, till only fragments of them were left. This process, applied to the first of the two, produced our Gradual; the second became the Alleluia or Tract. . . .

It is difficult to say exactly when the Gradual got its present form. We have seen that in St. Augustine's time, in Africa, a whole psalm was still sung. So also St. John Chrysostom alludes to whole psalms sung after the lessons. . . . In Rome the psalm seems not yet to have been curtailed: "Wherefore we have sung the psalm of David with united voices, not for our honour, but for the glory of Christ the Lord." Between this time and the early Middle Ages the process of curtailing brought about our present [1913] arrangement.

One of the things the 16th-century Reformers wished to do was to restore the Psalms to worship, an effort that appears to need renewal every generation, even in churches that are heirs to the Reformation. My own website, dedicated to the Genevan Psalter, is intended to be part of this effort.
Posted by David Koyzis at 11:12 No comments:

Song of the Three Youths 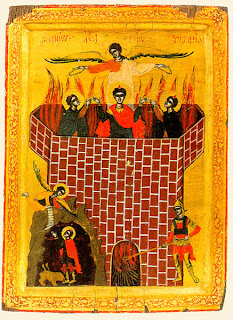 I have posted on my Genevan Psalter website my most recent song, a metrical versification of the Song of the Three Youths, variously known also as the Song of the Three Holy Children or simply the Song of the Three. This marvellous hymn of praise is traditionally ascribed to Daniel's three companions from within the fiery furnace after they had been cast there by the Babylonian King Nebuchadnezzar. It does not appear in the Hebrew canon, but it is found in the Septuagint and later translations based on it, where it is inserted into the third chapter of Daniel. Though not strictly regarded as canonical by Christians of the Reformation, it has nevertheless found its way into the church's sung canticles, as found in the Book of Common Prayer and the Lutheran liturgy. Both text and tune I wrote earlier this week. The tune I have titled BENEDICITE, after the Latin name for the canticle, Benedicite Omnia Opera.

This morning I was privileged to examine an ancient edition of the Geneva Bible published in England towards the end of the 16th century. Following the text of the Scriptures itself is a section with liturgical resources, in which the Benedicite finds an honoured place. Indeed it deserves to be known and sung widely by all Christians of every tradition.
Posted by David Koyzis at 11:16 No comments: 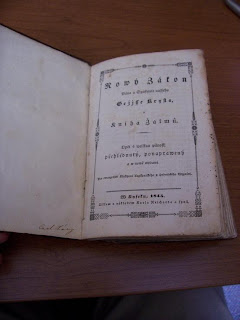 As a lifelong aficionado of old books, I have made a point of visiting the local antiquarian bookshops while travelling. During a visit to Prague in what was then still called Czechoslovakia in November 1976, I found more than one such shop and purchased a number of volumes dating from the 19th century. One of these was a metrical psalter and hymnal published in 1900, a scanned photograph of which can be found on my Genevan Psalter website.

Another volume dates from 1845 and contains the New Testament and Psalms translated into the Czech language. (Years later I was struck by the irony of my having taken a Bible out of a communist country!) The print is in the old German blackletter and the text uses an older spelling (with "w" for "v", "j" for "i", &c.). The frontispiece (shown above) indicates that this edition was intended for use by "Evangelical Christians of the Augsburg and Helvetic Confessions," i.e., by Lutheran and Reformed Christians. 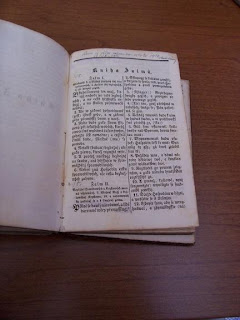 The Psalms are, of course, of special interest to me, especially the various ways they are used in the course of the liturgy or by individual believers at prayer. Two days ago, while paging through this section, I discovered something I hadn't before noticed. The owner of this volume at the beginning of the 20th century, whose name seems to have been Karel (spelt "Carl" in the handwritten name at the bottom of the page opposite the frontispiece) Lány, read through the Psalms at the pace of one psalm per day (except for Psalm 119), taking time to mark the date at the top of each. (Might it have been this Karel Lány?) He started with Psalm 1 on "1./8.", i.e., 1 August 1914, and continued until he read Psalm 150 on "18./I. 1915", i.e., 18 January 1915.

The timing may not have been incidental. Lány lived in Austria-Hungary, whose heir to the throne, Archduke Franz Ferdinand, had been assassinated in Sarajevo on 28 June. Tensions had mounted after that, with Austria-Hungary issuing an ultimatum to Serbia on 23 July and declaring war five days later. This quickly brought the other European powers onside of either Austria or Serbia, with battles beginning and intensifying into the autumn and winter months. It seems rather likely that Lány — apparently a Lutheran or Reformed Christian living in the predominantly Catholic Czech provinces — turned to the Psalms as the Great War was breaking out.

Perhaps he had a son of conscription age and was concerned for his safety should his country go to war. As a member of a religious minority (and with Hungarian origins at that), he may have sensed how fragile his country's unity really was at the outset of what proved to be the defining event of the 20th century. One can only imagine the subsequent history of this little book. It is possible that Lány lived into the nazi and communist eras, when atheistic régimes made it costly to maintain a public witness to the faith. After Lány's death, the volume may have passed down to his children and grandchildren who were perhaps less appreciative of its significance, selling it to an antiquarian bookseller, whence it came into my hands three decades ago. Of course this can only be speculation.

One thing is certain. While the Battle of Tannenberg was raging to the north between Germany and Russia, Lány read these words from Psalm 27:

Though a host encamp against me,
my heart shall not fear;
though war arise against me,
yet I will be confident.
One thing have I asked of the LORD,
that will I seek after;
that I may dwell in the house of the LORD
all the days of my life,
to behold the beauty of the LORD,
and to inquire in his temple.
For he will hide me in his shelter
in the day of trouble;
he will conceal me under the cover of his tent,
he will set me high upon a rock.

Posted by David Koyzis at 11:27 No comments: