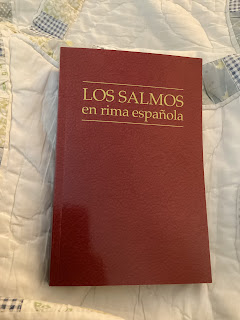 Here is the author's preface translated into English:

It has been thirteen years since the completion of the first version of the Psalter (Los Salmos metrificados en lengua castellana), and eleven since its publication. During this time, in which we have learnt to sing these texts with the music of the Genevan Psalter, we have been able to see in which places they could be improved, and this in two ways: on the one hand, to facilitate singing, and, on the other, above all to make them more faithful to the biblical text. 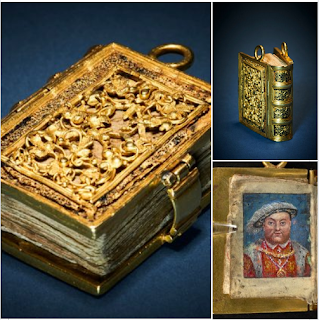 The British Library recently posted this item and description on its Facebook page:

In the 16th century, it was fashionable for rich women to wear tiny books hanging from their belts or ‘girdles’. This girdle book is bound in gold and black enamel. When opened it reveals a portrait of Henry VIII and is rumoured to have belonged to his second wife, Anne Boleyn.

The portrait of Henry is charming with smiling cherry lips and sparkling blue eyes. However, there’s no reference to the painting before 1849. Plus it looks nothing like Tudor portraiture – where’s Henry’s glare and pale skin?

An 18th century bookseller, Robert Triphook, mixed up our book with one Anne Boleyn gave to the Wyatt family, which had similar golden covers. The portrait was likely added late to add authority to the claim. So if not Anne Boleyn - who actually owned this book? There is one clue.

Each page contains Psalms translated into English verse. These translations exist in only one other copy – created by John Croke (d.1554), who dedicated the work to his wife. As both manuscripts are written in Croke’s own handwriting, the most likely recipient of both volumes was Prudence Croke.

The book is very likely this one accessible online: Thirteen Psalms and the First Chapter of Ecclesiastes Translated into English Verse by John Croke.

Posted by David Koyzis at 10:56 No comments: 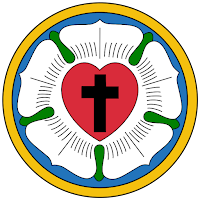 In the 16th century, the Reformation took more than one path in its efforts to reform the western catholic church. Two of these streams are the Lutheran and the continental Reformed, which went their separate ways over the sacraments. At the Marburg Colloquy in 1529, while the Ottoman Turks were besieging Vienna nearly 800 kilometers to the east, Luther defended the real presence of Christ in the Lord's Supper against Ulrich Zwingli, who asserted that Christ's body was at the right hand of God following his ascension and thus could not be physically present in the sacrament.

Besides their confessional differences, the Lutheran and Reformed also differed liturgically. Luther was content to translate the existing Roman rite of the Mass into German with modifications intended to purge it of its mediaeval accretions. The Reformed, by contrast, sought to recover a lost liturgical heritage as indicated in the title of the 1542 edition of the Genevan Psalter published in Geneva: La forme des prières et chantz ecclésiastiques: avec la manière d'administrer les sacremens, & consacrer le mariage : selon la coustume de l'Église ancienne. Note especially that last phrase, "according to the custom of the ancient Church." The Reformed sought a more thorough reworking of the liturgy in accordance with God's word and what they knew (or thought they knew) of early church usages, while Luther's followers were willing to retain what they deemed to be of value in the existing rites.

This event has now been posted on the Meeter Center's YouTube channel. I was pleased to participate by leading the reading of Psalm 98 at 58:46.

Posted by David Koyzis at 06:00 No comments:

Here is Meletios Kashinda singing Psalm 135 (136, according to Hebrew numbering). It is rather extraordinary to find an African with an excellent grasp of the Greek language and a mastery of the Byzantine chant tones. And what a powerful voice!

Posted by David Koyzis at 09:01 No comments:

The Psalm 'outside the number'

My recent post about the Qumran tradition of Davidic authorship is a reminder that not all of the psalm literature of the ancient Israelites made into the canonical Psalter we know from our bibles. In the Orthodox tradition, we find an extra psalm in some manuscripts of the Greek Septuagint which is described as "outside the number" (εξωθεν του αριθμου) of the 150 Psalms. It is sometimes referred to as Psalm 151 and is labelled thus in the New Oxford Annotated Bible. Here it is in the New Revised Standard Version:

This psalm is ascribed to David as his own composition (though it is outside the number), after he had fought in single combat with Goliath.

1    I was small among my brothers,
and the youngest in my father’s house;
I tended my father’s sheep.
2    My hands made a harp;
my fingers fashioned a lyre.
3    And who will tell my Lord?
The Lord himself; it is he who hears.
4    It was he who sent his messenger
and took me from my father’s sheep,
and anointed me with his anointing oil.
5    My brothers were handsome and tall,
but the Lord was not pleased with them.
6    I went out to meet the Philistine,
and he cursed me by his idols.
7    But I drew his own sword;
I beheaded him, and took away disgrace from the people of Israel.

As far as I know, no one has attempted to set this to metred verse, but it is included in Saint Dunstan's Plainsong Psalter with an appropriate chant tone.

Posted by David Koyzis at 10:09 No comments: