Here is a compelling arrangement and performance of Genevan Psalm 100 according to the text of Albert Szenci Molnár (1574-1634). I had not come across this particular arrangement of the tune, and the poster doesn't tell who the composer is. Performed by the Psalterium Hungaricum Choir conducted by Katalin Györffy, with Bernadett Szekér on the piano, it was recorded on 4 November 2018 at the Fasori Reformed Church in Budapest.

Incidentally, the video incorrectly numbers the Psalm as 90.

Posted by David Koyzis at 12:39 No comments:

The Illuminated Book of Psalms 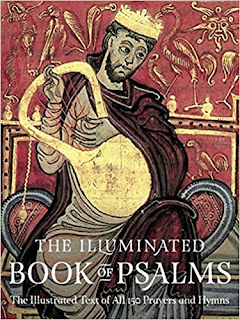 My beloved wife has the wonderful habit of giving me Christmas gifts related to the biblical Psalter. Last year she gave me a copy of the 1650 Scottish Psalter printed in 1788. This year she presented me with a beautifully constructed volume, titled The Illuminated Book of Psalms: The Illustrated Text of All 150 Prayers and Hymns. It contains the Psalms from the King James Version of the Bible in a most attractive format. Although the texts are printed in a modern font, the initial letter of each psalm is large and stylized. Interspersed amongst the texts are images from a variety of mediaeval European psalters and books of hours, and even some Jewish and Islamic manuscripts. The overall aesthetic effect is definitely appealing, particularly to someone who already loves mediaeval art.

The books of hours were treasured volumes owned largely by nobles at a time before the invention of the printing press, when books were lovingly hand-written and not widely available to a broader—and mostly illiterate—public. We tend to associate the regimen of daily prayer with the monasteries, but non-monastic nobles, who could more easily afford them, prayed the Liturgy of the Hours in some fashion with the aid of such books. As we might expect, these were in Latin, the liturgical language of the western church. Accordingly, most of the images include at least a portion of the Latin text of the relevant psalm.

Unfortunately, artists, philologists and biblical scholars are not known for collaborating on projects, and this points to one of the defects of this volume. The editors seem unaware that the numbering of the Psalms differs through most of the collection between the Hebrew and the Septuagint/Latin Vulgate. Furthermore, the editors appear not to be familiar with Latin. This means that some of the images are correctly identified as a particular psalm according to the LXX/Vulgate numbering, but they are juxtaposed with the printed text according to the Hebrew numbering. At least one fragment is entirely misidentified (Psalm 81 becomes 84 on p. 142), an error that could have been prevented if it had been proofread by someone with knowledge of both the Bible and of Latin. The juxtaposition of an Islamic manuscript with Psalm 90 goes unexplained, and one senses that aesthetic considerations outweighed actual relevance in this case.

Nevertheless, despite the flaws, the volume is beautiful in virtually every respect as a work of art, and it could even function as a prayer book for the believer accustomed to Jacobean English. An attached red bookmark will aid in this use. Its size measures 5.6 x 0.7 x 8.3 inches and weighs 12.6 ounces, making it easily portable.

One last thing to note is that there appear to be slightly different editions of this title on the market, such as this and this, sold respectively in Canada and the United Kingdom. Whether they use the same images I cannot say without seeing the other volumes, but they seem to represent the same high quality that went into my copy.

Here's one more on this topic posted by Canadian organist Frank Ezinga:


It would be wonderful if a young scholar in liturgical studies were to undertake to explore more thoroughly the connection between Gregorian chant and the Genevan melodies. At 4.05 Ezinga introduces his collection of Genevan Psalters in different languages. I would personally love to get my hands on an early copy of the original French psalter, as well as Hungarian and Indonesian psalters. Someday perhaps.
Posted by David Koyzis at 08:49 No comments: