Singing the Psalms through adversity: the Czechs


The following appeared in the 11 March issue of Christian Courier as part of my monthly "Principalities & Powers" column. I have, of course, written on this subject before in this space.

In November 1976 I was privileged to visit what was then called Czechoslovakia and its capital city, Prague. Although the communists were still in power and the weather was cold and gloomy during my stay, I fell in love with this beautiful 14th-century urban jewel, which managed to glitter despite the austere Stalin-era buildings at its periphery. As a child I had grown up hearing one of my mother’s favourite musical pieces, Bedřich Smetana’s Vltava, or Moldau, a tone poem dedicated to the river on which Prague is built. Thus I was thrilled finally to walk across the fabled Charles Bridge spanning the waterway that had inspired the 19th-century composer.

For an amateur musician Prague is a treat, as its residents glory in the music of Antonín Dvořák, Leoš Janáček, Bohuslav Martinů and many others. Stepping into a church one Sunday I heard a soloist singing two of Dvořák’s Biblical Songs, which I had worked up in my undergraduate voice lessons and had come to love. Dvořák wrote these haunting songs based on the Psalms while in the United States, after learning of the death of his friend and conductor, Hans von Bülow, and of the imminent death of his own father back in Europe. Not surprisingly, the grieving composer turned to the Psalms for comfort.

While in Prague I visited more than one antiquarian book shop, purchasing an 1845 Czech New Testament and Psalms. (In retrospect I’ve come to recognize the irony in my taking a Bible out of a communist country when so many other Christians were taking risks to bring Bibles in.)

But it was another purchase at one of those stores that I keep returning to decades later. This was a small, thick volume called Malý Kancionál, or Little Hymnal, published in 1900 by the Unity of the Brethren, also variously known as the Bohemian Brethren, the Moravian Brethren and the Unitas Fratrum, founded by Jan Hus at the start of the 15th century. On the front cover is a stylized illustration of a chalice, a prominent Husite symbol, stemming from their championing the right of the laity to receive the Eucharistic cup along with the bread to which ordinary believers were at that time restricted. Inside the covers I found a complete metrical psalter, along with some 350 hymns – a psalter hymnal, in short. This sat on my shelf for nearly a decade before I discovered the significance of this book. The 150 Psalms are in fact set to the Genevan tunes, as used in the Swiss, Dutch, Hungarian and other Reformed churches. I had had no idea that Czechs had ever sung these, but obviously some did. Where did they come from?

A few years ago I learned the full story. Jiří Strejc (also known as Georg Vetter, 1536-1599), was a Brethren minister born in Zábřeh in Moravia. Strejc studied in Tübingen and Königsberg, where he came into contact with the Psalter of Ambrosius Lobwasser, a professor of jurisprudence at the university there. Strejc was so favourably impressed by Lobwasser’s German translation of the Genevan Psalter that he decided to model his own Czech versification on it, an undertaking he completed in 1587. Strejc is probably best known for his German-language hymn text, Mit Freuden Zart, familiar in English as Sing Praise to God, Who Reigns Above, the tune to which comes from the Bohemian Brethren’s Kirchengesänge (1566) and bears more than a passing resemblance to that of Genevan Psalm 138. Whether Strejc and Lobwasser ever met I have been unable to determine, but the latter’s psalter would come to influence the liturgical life of Czech protestants by way of Strejc.

The modern Czech Republic is a largely secular society with abysmally low rates of church attendance, a condition undoubtedly exacerbated by four decades of communist misrule. Nevertheless, possessing such a rich heritage in Dvořák’s Biblical Songs and Strejc’s metrical psalter, Czech Christians have a solid basis on which to reinvigorate their country’s tepid church life six centuries after Jan Hus’s abortive efforts at reformation. May God grant that Hus’s work finally come to fruition in the churches of the Czech Republic.
Posted by David Koyzis at 20:17 No comments:


My Hamilton neighbour Tim Nijenhuis has just completed his own piano arrangements of all of the Genevan Psalm melodies, titled Genevan Melodies for Piano - Omnibus, which is available at his genevatunes.com website. I've not yet seen the collection, but I hope and pray that it will find a receptive readership beyond his own church denomination. I have added his website to the links page of my own website. 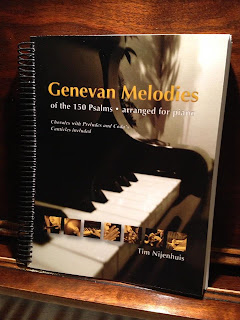 Posted by David Koyzis at 11:18 No comments:

Praying the Psalms: a scriptural rosary


Nearly a year and a half ago I wrote of the origins of the rosary, a form of piety long associated with the Roman Catholic Church: The decline of psalm-singing: the rosary. I noted then that the rosary had its origins in the monastic practice of praying the 150 Psalms and called attention to two efforts to reconnect the rosary with the biblical Psalter. Here is another that is worth exploring: The Scriptural Rosary (Psalms), sponsored by Presentation Ministries. Many would, of course, wish to alter the titles of the fourth and fifth glorious mysteries, and perhaps use another Bible translation, but this might just be a form of rosary that even Reformed Christians could profitably pray.
Posted by David Koyzis at 17:26 No comments:


I have now posted on the links page of my website a link to the Genevan Psalter in the Korean language, along with a passable English translation courtesy of the google translator. The texts, music scores and midi files for the Psalms themselves can be found by clicking on the table on the front page (the layout of which appears, incidentally, to have been patterned after the table on the front page of my own website). The harmonizations are by Claude Goudimel. This now complete collection is a marvellous resource for God's people in Korea. May it serve to advance his kingdom in that extraordinary east Asian country.
Posted by David Koyzis at 18:38 No comments:


Although this is not altogether relevant to the subject matter of this blog, I am nevertheless pleased to announce that my second book, provisionally titled, We Answer to Another: Authority, office and the image of God, will be published by Pickwick Publications, a division of Wipf & Stock in Eugene, Oregon. Here is a brief abstract of the book:

Many observers tend to conflate authority and power, even when they give lip service to the difference between these two, by identifying authority with one or more of the various capacities at our disposal. Similarly many are inclined to view authority and freedom as, if not outright polarities, then dialectically related. By contrast, my argument is that authority is co-extensive with responsible agency and is resident in an office given us at creation. Moreover, when we encounter authority, we encounter nothing less than the image of God, which always points beyond itself. This central authoritative office is in turn manifested in a variety of offices related to the communities of which we are part.

Here is the table of contents as currently projected:

These details, including the title, are, of course, subject to modification. I will keep readers posted on the progress of the book as it makes its way through the publication process. Stay tuned.
Posted by David Koyzis at 10:58 No comments:


Our friend Jungwon Hwang has posted another performance of a Psalm, this one the 53rd, which is of course virtually identical to Psalm 14.


And two more from Ernst Stolz: Psalms 69 and 70, whose tunes are identical to those of 51 and 17 respectively.