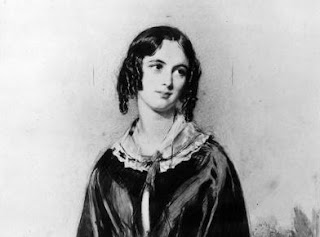 I recently finished reading Charlotte Mary Yonge's novel, The Heir of Redclyffe, published in 1853 and an influential example of early Victorian sentimental piety. I've written a brief review here: A Novel Conversion, to which I've linked on my other blog. For our purposes here, I thought I would alert readers to a wonderful passage illustrating the influence of the Book of Common Prayer's Psalter on the novel's characters:

There is only one thing wanting,’ said Amy. ‘You may sing now. You are far from Philip’s hearing. Suppose we chant this afternoon’s psalms.’

It was the fifth day of the month, and the psalms seemed especially suitable to their thoughts. Before the 29th was finished, it was beginning to grow dark. There were a few pale flashes of lightning in the mountains, and at the words ‘The voice of the Lord shaketh the wilderness,’ a low but solemn peal of thunder came as an accompaniment.

‘The Lord shall give his people the blessing of peace.’

The full sweet melody died away, but the echo caught it up and answered like the chant of a spirit in the distance—‘The blessing of peace.’

The effect was too solemn and mysterious to be disturbed by word or remark. Guy drew her arm into his, and they turned homewards.

The passage's allusion is to the 30-day scheme for praying through the Psalms in the Prayer Book, which prescribes Psalms 27-29 on the fifth of every month. Many Christians have followed this pattern for generations, and I highly recommend it to readers of this blog. There is no substitute for the biblical Psalter in our daily prayers.

Posted by David Koyzis at 15:00 No comments: 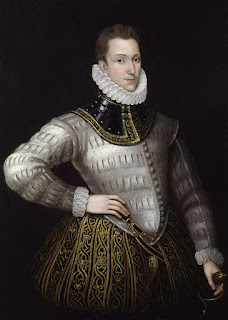 Sir Philip Sidney (1554-1586) was one of the vaunted heroes of the Elizabethan age who died in battle against Spain in the Netherlands at an altogether too young age. Born to an aristocratic family, he was elected a member of Parliament at the tender age of 18 and distinguished himself in public life and as a poet, being knighted by the Queen in 1583, three years before his death at age 31. Like many literary figures of the modern era, he set the biblical Psalms to verse, completing 43 of them, with the remainder eventually finished by his gifted sister, Mary Sidney Herbert, Countess of Pembroke (1561-1621). Together they are known as the Sidney Psalms, of which so eminent a poet as George Herbert (1593-1633) spoke highly.

Sir Philip's Psalms can be found here, and a perusal of this collection reveals that several, though by no means all, can be sung to their proper Genevan melodies. The very first Psalm is one of these:

He blessed is who neither loosely treades
The straying stepps as wicked counsaile leades;
Ne for badd mates in waie of sinning wayteth,
Nor yet himself with idle scorners seateth;
But on God's lawe his harte's delight doth binde,
Which, night and daie, he calls to marking minde.

Another is Psalm 42, whose Genevan tune is well known even outside the Reformed tradition:

As the chased hart, which brayeth
Seeking some refreshing brook,
So my soul in panting playeth,
Thirsting on my God to look.
My soul thirsts indeed in mee
After ever living Thee;
Ah, when comes my blessed being,
Of Thy face to haue a seing.

A brief survey of the hymnals in my library reveals no texts by Sir Philip, with the sole exception of Cantus Christi 2020, which carries his metrical versification of Psalm 31, titled All, All My Trust.

Posted by David Koyzis at 09:53 No comments:

Last week I dreamt that I was listening to a choir sing Genevan Psalm 150 to Claude Goudimel's arrangement. In the dream I thought it was beautiful but concluded that I preferred Zoltán Kodály's arrangement. Listen to both and decide for yourself:

Posted by David Koyzis at 10:16 No comments:

The Hungarians have done so much over the centuries to maintain the heritage of Genevan Psalmody, even during the four decades of the communist era. Here is Judit Lengyel singing Psalm 22, accompanied by a string ensemble.