One of the persistent myths about the origin of the Genevan Psalter is that its tunes were borrowed from popular melodies of the era, a misconception repeated by Abraham Kuyper in his Lectures on Calvinism in 1898. This view has been thoroughly discredited in the ensuing century. The use of the traditional church modes in the Genevan corpus constitutes evidence that the tunes owe a debt to Gregorian chant.

But there's even stronger evidence for this in individual psalm tunes. George van Popta, a member of the Lovers of Metrical Psalters facebook group, alerted us to this example of a Gregorian chant which seems an obvious source of one of the Genevan Psalms. This is the Victimae paschali laudes sung at Easter:

Now compare this to Genevan Psalm 80:


Here is Ernst Stolz' rendition of the same psalm:


This is powerful testimony that the Reformers, far from wishing to restart the church from scratch, as the ancient Donatists had attempted, readily retained what was good, true and beautiful in the ancient liturgies of the church catholic, adapting them for congregational use.
Posted by David Koyzis at 11:09 No comments:

Here is a marvellous rendition of Psalm 150, sung in Polish and accompanied by bouzouki, ukulele, hoop drum and tambourine. This is the work of the Psałterz Poznański: Psalm 150.
Posted by David Koyzis at 11:53 1 comment:

Posted by David Koyzis at 15:15 No comments:

More than four decades ago I acquired an old psalter and hymnal in Prague dating to the turn of the last century. The Psalms were set to the Genevan melodies and were versified by Jiří Strejc (1536-1599) in the Czech language. Click here to learn the full story. Here is a performance of Psalm 99 using Strejc's text:


Read more on Strejc's Czech Psalter.
Posted by David Koyzis at 08:47 No comments:

Keith and Kristyn Getty are two contemporary hymn-writers who are having an impact on the liturgical life of the church around the world. It is difficult now to recall a time before In Christ Alone came into being at the start of the century. Here is their version of the De Profundis, Psalm 130, the product of a collaborative effort among Keith Getty, Jordan Kauflin, Matt Merker and Stuart Townend:


Incidentally, the tune at the beginning and end is the well-known common-metre melody, MARTYRDOM, while the text appears to be a reworking of that from the Scottish Psalter of 1650.
Posted by David Koyzis at 15:08 2 comments:

A Manual of Parochial Psalmody: Tate & Brady for the 19th century 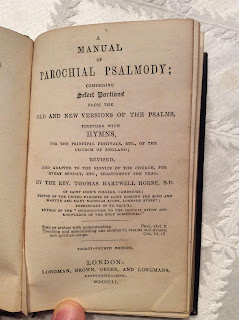 Not too long ago I was looking through our family's collection of antiquarian and rare books and made a delightful discovery. I picked up a leather-bound volume with the following printed on the spine: HORNE'S PSALMS AND HYMNS. I opened it up and found the full title inside: A Manual of Parochial Psalmody: Comprising Select Portions from the Old and New Versions of the Psalms, Together with Hymns, for the Principal Festivals, etc., of the Church of England; Revised, and Adapted to the Service of the Church, for Every Sunday, etc., Throughout the Year. By the Rev. Thomas Hartwell Horne, B. D., author of An Introduction to the Critical Study and Knowledge of the Holy Scriptures.

Because this is the sort of book that interests me greatly, I assumed that I must have purchased it somewhere long ago and subsequently forgot about it. But I couldn't imagine that I would neglect to remember such a thing. However, when I looked inside the cover, I found my wife's handwriting. It turns out that she had purchased the volume during her studies in Cambridge, England, in 1987, and it sat unnoticed in our library for all the years of our marriage.

Most of the history of psalm-singing has consisted, not of sophisticated choral polyphony, but of ordinary believers joining their voices to worship the God who has saved them in Jesus Christ. Here is Genevan Psalm 2, reputedly a favourite amongst Brazilian Christians, sung in Portuguese.

Posted by David Koyzis at 10:34 No comments:

Here is a lovely performance of Jan Pieterszoon Sweelinck's arrangement of Genevan Psalm 150:

Posted by David Koyzis at 11:56 No comments:

Last month I was privileged to spend time in Germany at the Internationale Hochschule Liebenzell (IHL) in Bad Liebenzell, a beautiful village nestled in the Black Forest. The IHL is a ministry of the Liebenzell Mission, which was founded in 1899 and has its roots in a late nineteenth-century revival in Germany. It has branches in Canada, the Northern Mariana Islands, and six other countries around the world. The Mission is active in church-planting, Bible translation, education, evangelism, children and youth ministry, medical care, air service, substance addiction therapies, ministry to immigrants and community development in twenty-five countries. Remarkably, it also has monastic-like brotherhoods and sisterhoods, a fellowship of deaconesses, a retreat centre and a literature distribution ministry. It appears to be independent of any denomination, yet it does plant church congregations.

While there I found a stack of small red hymn books, titled Evangelisches Kirchengesangbuch, published for the Evangelische Landeskirche in Württemberg (1987). The layout, including the musical staves, is very like the Dutch Liedboek voor de Kerken. The volume contains a liturgy of word and sacrament in the front and numerous hymns thereafter. A section in the back includes a series of scripture readings in lectionary format organized according to the church year. Also an all-too-brief section of Psalmlieder, using some of the tunes of the Genevan Psalter. I requested to take a copy home with me, and my hosts graciously granted my request. 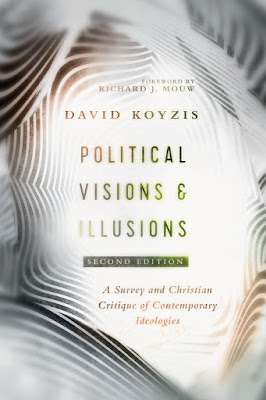 The second edition of Political Visions and Illusions is due out early next year. In the meantime, the new cover can be seen at right.

The new edition will include a reworking of the chapters in the first, with the addition of discussion questions after each chapter. A key difference from the first edition is that the redemptive narratives underpinning the ideological visions will be brought more explicitly into the foreground. This theme was present in the first, but it will be more visible in the second, enhanced by a series of illustrations highlighting these stories.

Finally, recognizing that this book has been used profitably in theological seminaries, I have added "A Concluding Ecclesiological Postscript," in which I take up the question of the role of the institutional church—as opposed to the larger corpus Christi, or body of Christ—in addressing political life, with references to the Barmen Declaration (1934), Mit Brennender Sorge (1937) and the Belhar Confession (1986). A new foreword will be written by Richard J. Mouw, former president of Fuller Theological Seminary and author of many books, including He Shines in All That's Fair and Abraham Kuyper: A Short and Personal Introduction.

I will let everyone know when the book is published. Stay tuned.

Don McLean: The Waters of Babylon

Here is another version of Psalm 137, sung by the American popular singer and songwriter Don McLean:

Posted by David Koyzis at 13:51 No comments:

Here is a song from four decades ago that we may have forgotten. It's not exactly a metrical psalm, but it is certainly rhythmic with a distinctive reggae flavour. Psalm 137 and a couple of phrases from Psalm 19 are included here.

Even Roman Catholics sing the Genevan Psalms on occasion. Here it is the Solemnity of the Body and Blood of Christ, 7 June 2012, beginning with a mass at the Basilica of Saint John the Lateran, followed by a procession to Saint Mary Major and a eucharistic blessing. One assumes that Pope Benedict XVI is the white-robed man in the vehicle.

Posted by David Koyzis at 08:50 No comments:

And here's one more:

Posted by David Koyzis at 16:48 No comments:

The traditional western liturgy prescribes the singing of Psalm 25 on the first sunday of Advent. This particular version is from the Psałterz Dawidów once again. Like the Genevan Psalter, it too is a metrical psalter in which the texts are rhymed in accordance with repeated stanzas. But the music is highly sophisticated and would not be appropriate for congregational singing. This is definitely for a trained choral ensemble. It deserves more exposure outside of Poland.

Posted by David Koyzis at 16:46 No comments:

This is a live performance of the exquisite Psalm 1 from the Psałterz Dawidów as sung by the Collegium Vocale Bydgoszsz in 2010:

Posted by David Koyzis at 16:33 No comments:

Psalm 81 from the Polish-language David's Psalter is here performed by the Choir of the West Pomeranian Technical University of Szczecin, Poland, directed by Szymon Wyrzykowski. The venue is the St. Catharine's German Evangelical Lutheran Church in Kiev, Ukraine.

Posted by David Koyzis at 09:10 No comments: 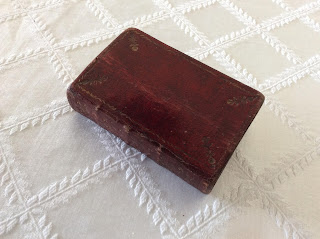