The following appears as the most recent instalment of my monthly column, "Principalities & Powers," in the Canadian newspaper, Christian Courier:

Among the four gospels Luke is unique in offering readers four canticles, along the lines of those found in the Old Testament. The best known of these is the Magnificat of the Virgin Mary (1:46-55), whose structure and content is patterned after the ancient Song of Hannah (I Samuel 2:1-10). Another is the Nunc Dimittis of Simeon (Luke 2:29-32), the elderly man who rejoiced that his eyes had at last seen in Jesus the salvation God had “prepared in the presence of all peoples.” The Gloria in Excelsis (Luke 2:14) would come to be elaborated and extended, finding its way into the ordinary of the mass in the western church. 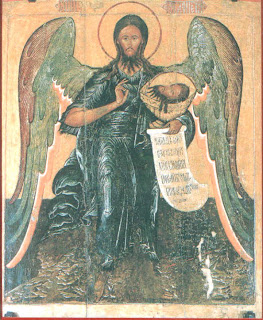 Then there is the Benedictus of Zechariah, father of John the Baptist, who sang it on the occasion of his son’s birth, shortly after his voice had returned to him (Luke 1:68-79). In the Orthodox tradition John is called Prodromos (Πρόδρομος) or Forerunner. He is portrayed in icons with long unkempt hair and beard, and with a cloth cloak covering a blue fleecy camel hair shirt. He is sometimes given angelic wings, as Jesus had identified him as the promised messenger (Greek: άγγελος) sent before him (Malachi 3:1; Matthew 11:10). Sometimes John is even shown carrying his own severed head in a dish!

During his lifetime, John was popularly recognized to be a prophet, and even the sceptical authorities were reluctant to deny it outright for fear of the people (Mark 11:32). Zechariah himself had prophesied that his son would be “called the prophet of the Most High” and “go before the Lord to prepare his ways” (76). Jesus identified John with Elijah, whose coming “before the great and awesome day of the LORD” Malachi had forecast centuries earlier (Matthew 11:14; Malachi 4:5).

Nearly a decade ago I wrote a metrical versification of the text of Zechariah’s song, to be sung to the tune, AN WASSERFLÜSSEN BABYLON, by Wolfgang Dachstein, organist for Martin Bucer who contributed to the metrical psalter used in 16th-century Strasbourg. The text follows below:

Praise to the Lord, to Israel’s God
who came to bring us redemption,
for he has raised from David’s house
a mighty power for salvation.
He spoke through prophets long ago
that he would free us from the foe.
He promised father Abr’ham
that he would save us, free of all fears,
from every enemy that appears,
that we might serve in holiness before him.

You, little child, are called of God
to prophesy to the nation,
to go before the Saviour’s way
and gladly herald salvation;
to tell abroad to all that live
that God is anxious to forgive;
for through his mercies tender,
his rising sun will shine from above,
illuming those who strayed from his love,
to guide their feet in peace with his own splendour.

There is perhaps no biblical passage that more breathes the spirit of Advent than Isaiah 40:1-8, which, after the destruction predicted earlier in the book, suddenly and unexpectedly promises comfort to the people of Israel, who have gone through generations of exile in Babylon. So unexpected is this change of tone that many, if not most, biblical scholars think it must have been written by someone other than the 8th-century prophet.

The opening of Isaiah's Book of Consolation is marvellously captured in this metrical versification so familiar to Christians during Advent: Comfort, Comfort Ye My People.

Written by 17th-century hymn writer Johannes Olearius, it was translated into English two centuries later by the great Catherine Winkworth, who did more than any other person to bring the corpus of German hymnody into the English language. The tune was composed in Geneva in 1551 by Louis Bourgeois and was assigned to Psalm 42. The third stanza runs thus:

Hark, the herald's voice is crying
In the desert far and near,
Bidding all men to repentance
Since the Kingdom now is here.
Oh, that warning cry obey!
Now prepare for God a way;
Let the valleys rise to meet Him
And the hills bow down to greet Him.

It would take too long to list the myriad composers who have set to music the Magnificat of Mary, as found in Luke 1:46-55. J. S. Bach's is perhaps the best known of the baroque settings, while, of the modern English-language versifications, Timothy Dudley-Smith's Tell Out My Soul has been a perennial favourite of many congregations for nearly half a century.

Less well known and less used liturgically is the ancient Song of Hannah as recorded in 1 Samuel 2:1-10. The Magnificat and Hannah's song are properly mentioned together, because the former is literarily and thematically dependent on the latter. Both Hannah and Mary are mothers rejoicing at the birth of an unexpected child. Hannah praises God that he has seen fit to end the curse of her barrenness, while Mary glorifies the Lord because he has chosen her to bear the promised Messiah. Each knew to her sorrow that she would have to give up her son one day.

John Mark Reynolds alludes to an ancient tradition which identifies Mary's parents as Joachim and Anna. Though the tradition has no explicit scriptural basis, it could conceivably represent a continuing memory of genuine persons who lived in the first century before Christ. However, I myself wonder whether there might not be another explanation for at least Anna's name. The Greek name Anna (Άννα) is, of course, a transliteration of the Hebrew Hannah (חנה). If Hannah's song is the "mother" of Mary's song, might this explain the identification of Mary's biological mother as Hannah? I will defer to the biblical scholars here, but it seems plausible to this admitted amateur.

"My soul magnifies the Lord, and my spirit rejoices in God my Saviour."
Posted by David Koyzis at 14:22 1 comment: