Calvijn in de Gouden Eeuw: Calvinist Music from France and the Netherlands, beautifully performed by Camerata Trajectina, an early music ensemble based in Utrechet, the Netherlands. Globe Records, 2009. This recording was produced in 2009, the Calvin quincentenary year. Among the Psalms performed are 100, 2, 91, 8, 9, 5, and several more, according to arrangements by Goudimel, Sweelinck, Claude Le Jeune and others. These are sung in Dutch and French. Tellingly, the Dutch versions use the 16th-century versifications of Pieter Datheen rather than the "traditional" 1773 version used in most Dutch churches into the mid-20th century, undoubtedly because the latter are judged to be too "late" for an ensemble specializing in music before 1600. The recording ends with Psalm 103 played on the carillon. I would love to be in a town square while this was being played from a church's bell tower. Available from Amazon Music. 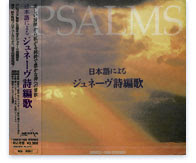 Genevan Psalms CD in Japanese, sung by the Bach Collegium Japan, directed by Masaaki Suzuki-sensei. Grand Rapids: Faith Alive Christian Resources, 1996. Do Japanese Christians really sing the Genevan Psalms? This recording is proof that at least some do so, and very well indeed. The great virtue of this album is the varying arrangements of the Genevan tunes using different voices and instruments. My personal favourite is Psalm 47, which in the hands of this group becomes wonderfully lively and energetic — complete with lute, recorder, brass and hand-clapping! Another is Psalm 100, which, in contrast to the Music of the Genevan Psalter CD above, is sung to its original tune. My least favourite is Psalm 42, in which the organ unfortunately overpowers the voices. Yet all in all, this is a recording to treasure and listen to repeatedly. Can be found on Henk Vogel's YouTube channel. 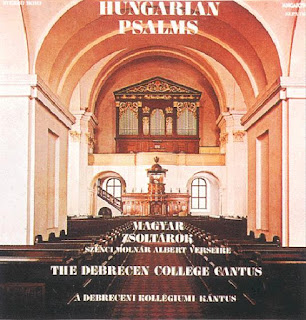 Hungarian Psalms (Magyar Zsoltárok), To Poems by Albert Szenci Molnár, The Debrecen College Cantus, conducted by Sándor Berkesi. Hungaroton, 1978; SLPX 11973. This is a wonderful vinyl recording I acquired in the mid-1980s. The psalms are sung in Hungarian to Molnár’s versifications. Musical arrangements are by Claude Goudimel and several more recent Hungarian composers, the most notable of whom is Zoltán Kodály. The renderings have something of a sturdy, central European beauty to them. My personal favourite is Psalm 23, although Psalm 150, the grand conclusion to the Psalter, is wonderful as well.

Kodály, Psaumes de Genève, Janácek, Elégie, Messe inachevée, Otce Náš, sung by the Ensemble vocal Euterpe, Lausanne, under the direction of Christophe Gesseney. Lausanne: Disques VDE-GALLO, 1993; CD-784. This recording contains seven arrangements of the Psalms by Kodály, in addition to three pieces by the Czech composer Leoš Janácek. The psalms are sung in French, according to the versifications of Clément Marot and Théodore de Bèze. Some of the same musical arrangements are also found in the Hungarian Psalms album, listed above.

Music of the Genevan Psalter, sung in English by several choirs, including the Sweelinck Singers, The Campus Choir (Calvin College), the Capella, and Festival of Psalms Audience. Grand Rapids: Calvin College, The H. Henry Meeter Center, Calvin Institute of Christian Worship, 1999. The musical arrangements are by various composers from the sixteenth to twentieth centuries. Versifications are from the 1987 Psalter Hymnal and the Book of Praise of the Canadian Reformed Churches. Curiously, Psalm 100 is sung to the tune of Psalm 134, which was associated with Psalm 100 only in the seventeenth century with the Scottish Psalter. Personally I find the tune for Genevan Psalm 100, with its phrygian (no, not Frisian!) modal flavour, much more compelling than the overly-familiar tune for Psalm 134.

One God: Psalms and Hymns from Orient & Occident, performed by the Pera Ensemble Istanbul. Ludi Musici, 2010. Genevan tunes from Ali Ufki, Claude Goudimel, Nicholas Vallet and Heinrich Schütz in both western and eastern styles. The solo vocal renditions here do not equal those of the other two Ali Ufki recordings described on this page. Nevertheless, quite good, all in all. Includes Psalms 1, 2, 5, 8 and 10. 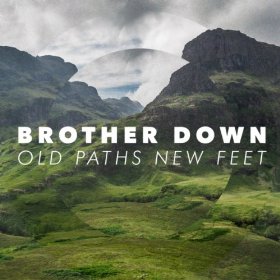 Old Paths, New Feet, performed by Brother Down. Bultitude Records, 2013. The musical style might be labelled Celtic folk rock or perhaps 21st-century gospel. Psalms 2, 100, 124, 6, 13, 42, 75 and 130 are sung to Genevan tunes. Psalm 63 is set to Thomas Tallis' haunting THIRD MODE MELODY, and Psalm 103 comes from Johann Graumann and Hans Kugelmann. The Psalms are from Cantus Christi, a psalter and hymnal widely used in congregations affiliated with the Communion of Evangelical Reformed Churches (CREC). Definitely worth hearing. Available from Amazon.

Psalmen Zingen in Kampen, performed by organist Willem Hendrik Zwart accompanying congregational singing of 14 Genevan Psalms in the Bovenkerk in Kampen, Netherlands. Kampen: JQZ Muziekprodukties Kampen, 1990. The treatments on this recording are typical of the Dutch tradition of unison psalm-singing, with arrangements generally masking the modal flavour of the tunes, though their original rhythms remain intact. The singing is earnest, if somewhat plodding. The recording appears to be out of print. 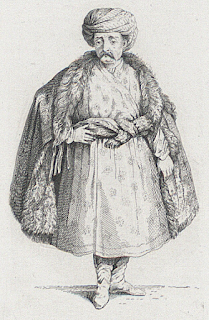 The Psalms of Ali Ufki, described as "An interfaith concert of sacred music exploring the shared traditions of Judaism, Turkish Sufism, Greek Orthodoxy and Protestant Christianity." This performance by a collection of musicians was recorded under the auspices of Dünya, an organization undertaking to "foster awareness, educate, deepen the dialogue and celebrate the similarities between the Jewish, Christian and Muslim faiths." Recorded 2005 at Harvard University. The one Genevan tune on this disc is Psalm 13, performed in Protestant, Jewish, Greek Orthodox and Turkish Sufi versions. The tracks to listen to are 1, and 17 through 21. Number 19, the "Greek Orthodox Version," takes its text directly from the Septuagint, where it is numbered Psalm 12, managing, by means of melismatic manipulation, to fit this nonmetrical text to the Genevan tune, where it sounds strikingly like Byzantine chant. This is a remarkable achievement, yet it is testimony to the enduring strength and versatility of the Genevan tunes. Definitely worth hearing and savouring. Available from Amazon Music. 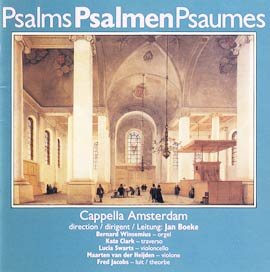 Psalms Psalmen Psaumes, performed by the Cappella Amsterdam under the direction of Jan Boeke. Rotterdam: Lindenberg Boeken & Muziek. This is a high-quality, beautiful recording of the psalms, many of which are of Genevan origin, with music and arrangements by Jan Pieterszoon Sweelinck, Claude le Jeune, Dietrich Buxtehude, Hans Leo Hassler, Heinrich Schütz and many others. Songs are sung in Dutch, German, French and Latin. Among other things, it features Luther's Ein' feste Burg sung in its original rhythm as arranged by Johann Walter. Also listen for the flute solo playing variations on Genevan Psalm 140 on track 9. Available from several vendors. 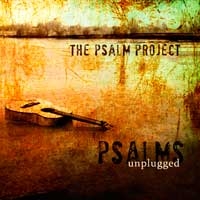 Psalms Unplugged, performed by a group in the Netherlands, The Psalm Project, under the leadership of Eelco Vos. This is a noteworthy recording rendering the Genevan Psalms in contemporary jazz style, employing a full array of instruments. The group generally sings in Dutch, but this is their first English-language album. With their unique treatments, they make the Genevan tunes sound as if they were composed the day before yesterday, although they do alter the melodies and rhythms somewhat to fit their purposes. For example, the well-known tune to Psalm 138 they effectively move from ionian to mixolydian mode, giving it nearly a Celtic flavour. In the hands of The Psalm Project, Psalm 150 takes on the flavour of a lively African-American gospel song. The results will likely win over even the classical music aficionado. Unlike many contemporary treatments of scripture songs, they do not restrict their efforts to psalms of praise, but are willing to tackle such lamentations as found in Psalm 22. Perhaps unsurprisingly they have not thus far touched the imprecatory psalms. Available from Amazon Music. 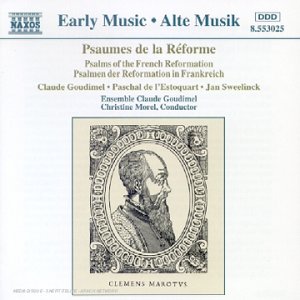 Psaumes de la Réforme, sung by the Ensemble Claude Goudimel, conducted by Christine Morel. Munich, Germany: HNH International Ltd., 1994. This recording may be as close to sixteenth-century Geneva as one is likely to get. Versifications are by Marot and musical arrangements are by Claude Goudimel, Paschal de l’Estouart and Jan Pieterszoon Sweelinck. The overused adjective sublime comes to mind here. One error should perhaps be noted: what is correctly described as Psalm CXLIII in the programme notes becomes "Psalm 163" on the back of these notes, i.e., the side visible to the listener.  (Reading roman numerals correctly is a dying art, it seems.) Available from Amazon Music. 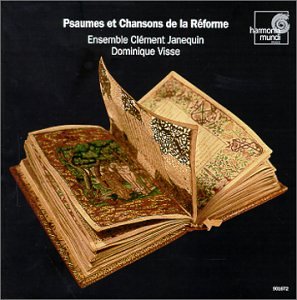 Psaumes et Chansons de la Réforme, sung in French by the Ensemble Clément Janequin, with counter-tenor solos by Dominique Visse. Germany: Harmonia Mundi S.A., 2000. From the jacket: “On listening to this Huguenot literary and spiritual treasury, one can only dream of what the Reformation musical tradition could have become had it not been nipped in the bud by the tragic events of the Religious Wars...” This recording includes a number of non-psalm pieces as well. Once again, as with the above-mentioned recording by the Ensemble Claude Goudimel, this one has a genuine Renaissance flavour. Available from Amazon Music. 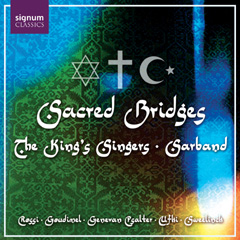 Sacred Bridges: Christian, Jewish and Muslim Psalm Settings, performed by Sarband and the King's Singers. World Village Music, 2005. The Genevan Psalms in Turkish? What an astonishing thought! But they do exist. Here's the story: The versifier was one Wojciech Bobowski (1610-1675), a musically-gifted Polish-born Reformed Christian who was kidnapped at 18 by Tatars and sold as a slave to the Ottoman Sultan. He became translator, treasurer and court composer for the Sultan, converting (at least nominally) to Islam and changing his name to Ali Ufki. Among his many impressive achievements, he translated the Bible into Turkish and versified the first 14 Psalms in that language, enabling them to be sung to their proper Genevan melodies. This small collection was published in 1665. This recording contains Genevan Psalms 9, 6, 7, 2 and 5, most of which are sung in both French and Turkish. The juxtaposition of these two very different styles makes for fascinating listening. With Sarband's treatment the Genevan tunes genuinely sound like Turkish music. The one flaw in this ecumenical project, aspiring as it does to build bridges amongst the three monotheistic religions, is that Muslims do not sing the Psalms. Highly recommended. Available from Amazon Music.

Sweelinck: Psaumes français & Canciones Sacrae, also performed by the Cappella Amsterdam but under Daniel Reuss' direction. This recording is comparable in quality to the one described above and includes Psalms 33, 91, 130, 77, 42 and 146. Available from Amazon Music.