Although the singing of the Psalms is nowadays associated with those churches standing in the Reformed tradition, the current revival of the liturgical use of the biblical Psalter is affecting even those standing in the Wesleyan and Holiness traditions. Evidence can be found for this in the Seedbed Psalter. From the front page of the website:

All of Scripture is given to us for “teaching, reproof, correction, and training in righteousness” which, of course, includes the Book of Psalms. We can certainly study the psalms, learn from them, be corrected by them, and be trained by them for righteousness, just like the rest of the Scriptures. But the Psalms are unique – they are the hymnbook of the people of God, and they are meant to be sung. Join us on this exciting journey as we learn to sing the Word!

Not surprisingly perhaps, the Seedbed Psalter borrows from the 1650 Scottish Psalter and Reformed Presbyterian (Crown and Covenant) resources. Among the fine items to be found on this website is the following quote from Dietrich Bonhoeffer: “whenever the Psalter is abandoned, an incomparable treasure vanishes from the Christian church. With its recovery will come unsuspected power.” Amen!
Posted by David Koyzis at 09:50 1 comment:


Our friend Ernst Stolz has now passed the one-hundred mark in his journey through the Psalms. Here is his lovely rendition of Psalm 104, posted just today:

Posted by David Koyzis at 17:11 No comments:

Brother Down sings the psalms 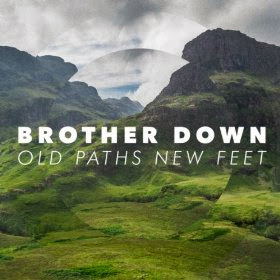 In recent years there have been a number of efforts to reinterpret the Genevan Psalms, including that of the Dutch group, The Psalm Project. Just over two years ago, I wrote of a group called Brother Down, which has finally released its new album to coincide with yesterday's observance of Reformation Day. The album, titled Old Paths, New Feet, is available from the usual sources, including amazon, which permits listeners to sample the individual tracks.

I plan to review the album here and on my Genevan Psalter discography page, but I will give a few initial impressions now based on what I've seen and heard thus far. To begin with, one observer has characterized these renditions as "pub music style." Perhaps. Second, although most of the tunes are Genevan, two of them, namely, those for Psalms 63 and 103 are not. Psalm 63 is set to Thomas Tallis' haunting THIRD MODE MELODY, which formed the basis of Ralph Vaughan Williams' classic 1910 composition, Fantasia on a Theme by Thomas Tallis. Third, I find it somewhat curious that the performers opted for texts in Jacobean English, which does not exactly fit their style of music.

But, as I said, these are preliminary thoughts that I hope to flesh out after I've heard the album in its entirety.
Posted by David Koyzis at 10:22 1 comment: