The Next Psalter: a sample


Last week I wrote of my intention to author a book on the Psalms, complete with fresh, non-Genevan versifications and melodies. Although for the most part I will not be posting these new ones here, I have decided to include a sample of what I am provisionally calling The Next Psalter. This is the universally beloved Psalm 23, for which I wrote a common-metre versification four years ago. I had originally set it to the tune, DUNFERMLINE from the 1650 Scottish Psalter. Now I have come up with a new tune, GATEVIEW, with a quite different feel. A pdf copy of the score can be found here.
Posted by David Koyzis at 11:17 No comments:

Wright on the Psalms 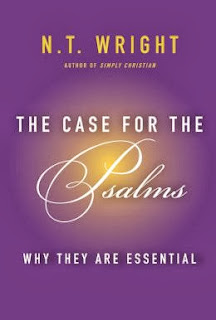 Few authors can boast the prolific output of N. T. "Tom" Wright, and, among those who can, fewer yet are capable of bridging the gap between the scholarly and the popular. But Wright moves easily between the two genres, and The Case for the Psalms: Why They Are Essential is definitely aimed at a lay readership. Although Wright is a New Testament scholar, he wrote this book out of his lifelong experience of praying through the Psalms on a regular basis. The immediate occasion for this writing was his participation at a conference at Calvin College a year ago this past January.

Among Reformed theologians, the Dutch figures, such as Abraham Kuyper, Herman Bavinck and (on this side of the pond) Geerhardus Vos are especially well-known for their redemptive-historical approach to the Bible, which reads the Bible not simply as a disparate collection of ancient religious texts but as a unified story of God's creation, followed by man's fall into sin, redemption in Jesus Christ and ultimate consummation at his second advent. Nevertheless, this way of reading the Bible is by no means limited to those with Netherlandic roots, and Wright is a worthy example of a similar approach among British scholars. Those familiar with Wright's Surprised by Hope, will recognize here as well his typical eschatological emphasis on the new creation to be inaugurated by Christ on his return. Salvation is not simply a matter of saving disembodied Platonic souls, but extends to the entire created order, which will eventually be suffused with God's glory, as it was intended to be from the beginning. Wright has done his readers a service by tracing this central biblical story through the Psalms.

Because so many of the Psalms were intended for Temple worship in Jerusalem, they see the Temple as the unique setting for God's presence in this world. Nevertheless, once the Temple was gone, God's glory did not go with it. This is where Wright's eschatological vision enters the picture, because the New Testament writers applied the Old Testament passages dealing with the Temple to the person of Jesus Christ, the new Temple and the unique vessel of God's glory. Moreover, the early Christian writers foresaw a time when the promises associated with Jerusalem and its Temple would extend to the whole creation. This is how God's people of the new covenant can sing Psalms 42-43 and 84, recognizing that the longing for God's house of worship is fulfilled completely in Jesus Christ.

Wright is, of course, a former bishop in the Church of England, and this colours his treatment here. As such he has experienced the chanting of the Psalms at Holy Communion and at Morning and Evening Prayer. Miles Coverdale's somewhat unpolished 16th-century translation of the Psalms has shaped generations of Anglican worshippers, including Wright. Yet Wright seems unaware that his tradition once made more use of the Psalms than contemporary Anglicans remember. He writes: "The Scottish church developed a well-known set of metrical psalms, translating the whole book into poems that could then be sung to regular hymn tunes" (168). But it didn't begin in Scotland. It actually started in England with the publication of the Sternhold & Hopkins Psalter in 1562, the same year that saw the completion of the Genevan Psalter. Generations of Anglicans grew up singing first Sternhold & Hopkins and later Tate & Brady's Psalter before metrical psalmody faded from the scene by the end of the 18th century. This tradition of sung metrical psalmody was as much an Anglican tradition as it was Scottish. Yet given that most Anglicans these days are unaware of this heritage, Wright can hardly be faulted for neglecting it here.

What I most appreciated in this book is Wright's emphasis that immersing oneself in the Psalms will transform one's worldview. This has been my experience as well. Some 35 years ago I discovered the Daily Office, with its pattern of praying through the Psalms on a regular basis. It didn't take me long to get "hooked" on the Psalms, drinking in their praises, lamentations, angry imprecations, complaints and, of course, thanksgivings.

Read Wright's book, and then read the Psalms. Not once, but regularly for the rest of the journey. And prepare to be changed.
Posted by David Koyzis at 07:30 No comments:

Singing the Psalms: my next project

Now is the time to share with you what I've been up to these past few weeks. I've not posted anything on my Genevan Psalter site recently, because I've now turned my efforts towards writing fresh English-language versifications of the Psalms set to original tunes. My 2009 CM versification of Psalm 23 now has music which I have expressly composed for it. Last sunday I wrote a metrical versification (11.11.11.11) of Psalm 1 and on wednesday I came up with a tune, which I arranged the following day. These are coming fairly quickly now, and I want to take advantage of the momentum for as long as I am able. Eventually I may post some of these new sung psalms, but not for now.

I am still waiting to hear from my editor on the final draft of the book manuscript I submitted in June on another topic, so I am using the time until then to work on other projects, including this one. Increasingly I am thinking that my next book will be on the liturgical use of the Psalms, and I plan to incorporate some of my own work with metrical psalmody in this. I've got a lot of material to work with, so I need to get as sharp a focus as I can on this.

This takes me outside my formally credentialled field of political science, of course, yet all of this is considerably more than a mere avocation for me, and it's a real labour of love. Your prayers for this project would be most appreciated.

Thank you in advance.