An acquaintance recently called to my attention two paragraphs from the Second Helvetic Confession, one of the confessional standards of the Swiss and Hungarian Reformed Churches, as well as of the Presbyterian Church (USA):

CHAPTER XXIII
Of the Prayers of the Church, of Singing, and of Canonical Hours 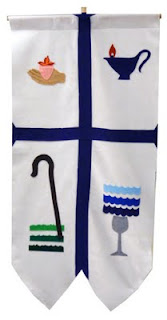 SINGING. Likewise moderation is to be exercised where singing is used in a meeting for worship. That song which they call the Gregorian Chant has many foolish things in it; hence it is rightly rejected by many of our churches. If there are churches which have a true and proper sermon but no singing, they ought not to be condemned. For all churches do not have the advantage of singing. And it is well known from testimonies of antiquity that the custom of singing is very old in the Eastern Churches whereas it was late when it was at length accepted in the West.

CANONICAL HOURS. Antiquity knew nothing of canonical hours, that is, prayers arranged for certain hours of the day, and sung or recited by the Papists, as can be proved from their breviaries and by many arguments. But they also have not a few absurdities, of which I say nothing else; accordingly they are rightly omitted by churches which substitute in their place things that are beneficial for the whole Church of God.

There are a number of things erroneously rejected by many of the Reformers, whose knowledge of antiquity was not always accurate, including the sursum corda in the Lord's Supper and the sign of the cross. In this case the authors of the Confession appear to have been unaware that chanting the Psalms in the course of daily prayer has ancient roots in the church, extending back into biblical times. See, for example, Psalm 119:164: "Seven times a day I praise you for your righteous ordinances." Also Daniel 6:10: "[Daniel] got down upon his knees three times a day and prayed and gave thanks before his God. . . ." And Acts 10:9: "Peter went up on the housetop to pray, about the sixth hour." Following scripture, the Rule of St. Benedict prescribed (or, perhaps better, codified) seven daily prayer offices for use in the monasteries:

Although St. Benedict intended these daily prayer offices for monastic communities, it seems evident that they were much more widespread in the early church. The Muslim practice of praying five times daily, which many westerners regard as strange, obviously has roots in earlier Jewish and Christian usage.

The Reformers recovered so many ancient things lost to the mediaeval church, especially the doctrines of grace. Yet, given what we know now of the ancient church and its liturgical practices, it is difficult not to conclude that in some instances they were too quick to discard usages that ought to have been retained.
Posted by David Koyzis at 23:18 1 comment:

I have just posted my versification for Psalm 38, along with my arrangement of the tune. This psalm is scarcely less dark than Psalm 88, which I set to verse the weekend after the Japanese earthquake and tsunami in March. It is definitely a psalm of lament, the kind we tend not to sing in our churches these days.

My iniquities flood o'er me,
and before me
all my sins are a burden.
My wounds fester without healing,
I am reeling
from my mad and foolish ways.

I am bowed low in my grieving,
scarce believing
that I'll cease from my mourning.
For my loins are racked with burning
from your spurning;
there's no soundness in my flesh.

The author of the psalm appears to be conflicted, sounding different, and not entirely consistent, themes throughout. On the one hand, he recognizes and confesses his own sin and its role in his current state of suffering. Yet he also believes he has been unjustly abandoned by his friends, who fear to suffer his fate along with him:

Foes oppose me without reason
in their treason,
they are many and mighty.
Those who answer good with evil
cause upheaval;
enemies are they of right.

This psalm, which is ascribed to David in the Hebrew, could relate to episodes in the great Hebrew ruler's life when he was fleeing from enemies plotting his demise, including his wayward sons whom he proved unable to control. A not altogether able administrator, David was undoubtedly painfully aware of his own shortcomings in the unfolding of these episodes, while nevertheless protesting against his betrayers.

On the other hand, a christological interpretation might see this psalm expressing the words of Christ, who, while not sinful himself, bore the sins of the world in his own suffering on the cross.

A word about the tune, which has a metrical structure unusual even for the Genevan psalms: 847 847. The rhyming scheme is aab ccd, with the short four-syllable lines rhyming with the previous eight-syllable line. The traditional rhyming scheme has rhymed lines 3 and 6, despite their having feminine and masculine endings respectively. Consequently, I have abandoned any effort to rhyme these lines in my own versification, which I believe makes the psalm more singable.

This psalm of lament ends, if not on an upbeat note, at least on a note of expectation of future redemption:

LORD above, do not forsake me,
rather make me
to be near you for ever.
Hurry to become my saviour;
show your favour
to me, my redeeming LORD.

My Brazilian alter-ego, Lucas Freire, has alerted me to the following volume available via Google Books: All the French Psalm Tunes with English Words, a collection of Psalms accorded to the verses and tunes used in the reformed Churches of France and Germany (London: T. Harper, 1632). This is the first I have heard of this version, which places an English translation of the Genevan Psalms earlier than I had previously assumed.

As was typical of the early metrical psalters, the language, while rhymed, is not particular poetic and is rather woodenly literal. Psalm 150 runs as follows:

Praise him, ioyning vvith the noyse
Both of Trumpets and Hautboyse[1],
Praise him in the Psaltery,
And the Harps svveet harmony.
Laud the Lord with praise abounding,
Timbrel, Taber[2], Fife and Flute,
Organ, Sagbut[3], Cornamute[4],
Laud the Lord, his praise resounding.

Praise to him for his goodnes,
Let the cymbals loud expres
Viall[5], Virginall[6] and lute,
Let not string nor breath be mute,
Him to praise let all indeuer [endeavour].
All his works, aboue, beneath,
VVhat so ere doth moue or breath,
Praise the Lord most blessed euer.

Note: Here is a key to some of the less familiar musical instruments referenced above: