Praying the Psalms in community

I recently found this wonderful quote from St. John Chrysostom through one of my current students: 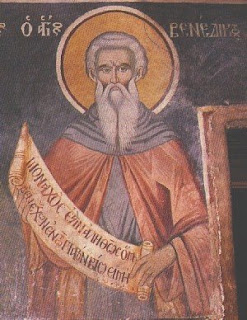 Coincidentally, I have been reading The Rule of St. Benedict, which in some fashion governs the monastic communities in the Benedictine tradition. I am struck by how much my own practice of prayer for the last more than three decades has been shaped by Benedictine spirituality, and especially the place of the Psalms within it. The basic patterns of the Liturgy of the Hours were at least codified, if not created, by St. Benedict in the 6th century. Among other things, Benedict prescribed that all 150 Psalms were to be sung each week. After having set forth the pattern of sung psalms through the successive prayer hours during the night and day, he offers this:

We particularly admonish that if this distribution of the psalms is displeasing to anyone, he should make any other disposition he may think better. Let him take care, however, above all that each week the entire Psalter of one hundred fifty psalms be recited and be always begun anew at the Night Office on Sunday. For those monks show an exceedingly slothful service in their devotion who, within the course of a week, sing less than the entire Psalter with the usual canticles, since we read that our holy Fathers resolutely performed in a single day what we tepid monks but hope to achieve in an entire week.

For those of us who are even more tepid than St. Benedict and his followers, some are content to sing through the Psalms every 30 days, as prescribed in the Book of Common Prayer, or at an even slower pace. Inspired by these readings, this past weekend I versified and arranged another psalm, this time Psalm 133, which extols the joys of living in community:

Behold, how right and good it is whenever
brethren have dwelt harmoniously together!
It is like precious oils that flow
upon the consecrated priestly head;
down to the beard their goodness too is shed;
even to Aaron's beard they go.

Anointing oils flow down along the trimming
of Aaron's garments where their drops are gleaming,
as if the dew that oft descends
on Hermon's mountains were to come and rest
on Zion's mount where God his people blessed
with blissful life that never ends.

Of course, most of us do not live in monasteries. But what if the ordinary communities of which we are part, namely, families, schools, work communities, &c., were to adopt something of this benedictine spirituality, praying through the psalms together on a regular basis? By God's grace, it could just transform these very communities.
Posted by David Koyzis at 13:11

I am enjoying your posts. The Psalter is for the formation of the chasidim, a word used more often in the Psalter than all other places in the Senior Testament combined (25/32) I think it ougth to be rendered in English with some relation to the word it embed: mercy. Our 'saints' need that above all things, then they become likest God as Shakespeare puts it.