Calvin in the Golden Age 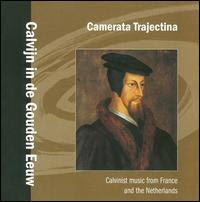 I have recently acquired another recording featuring the Genevan Psalms: Calvijn in the Gouden Eeuw: Calvinist Music from France and the Netherlands. A number of psalms are here beautifully performed by the Camerata Trajectina, an early music ensemble based in Utrecht, Netherlands. This recording was produced in 2009, the Calvin quincentenary year. Among the Psalms performed are 100, 2, 91, 8, 9, 5, and several more, according to arrangements by Goudimel, Sweelinck, Claude Le Jeune and others. These are sung in Dutch and French. Tellingly, the Dutch versions use the 16th-century versifications of Pieter Datheen rather than the "traditional" 1773 version used in most Dutch churches into the mid-20th century, undoubtedly because the latter are judged to be too "late" for an ensemble specializing in music before 1600. The recording ends with Psalm 103 played on the carillon. I would love to be in a town square while this was being played from a church's bell tower. This is definitely worth purchasing and listening to.
Posted by David Koyzis at 13:48