During a recent holiday to Grand Bend, Ontario, our family visited the marvellous Lambton Heritage Museum, which proved to be much more interesting than we had expected and is definitely worth seeing if you get out that way. In addition to the indoor museum, boasting quilts, old furniture and other regional artefacts from the late 19th and early 20th centuries, the large grounds host a reconstructed rural village, complete with, among other things, a blacksmith shop, a slaughterhouse, an old schoolhouse and a church. The church building once housed the former Cameron Presbyterian Church, which was founded in 1867, the year of Confederation, and lasted until the very end of the last century, when it closed due to an ageing and attenuated membership.

One item caught my eye on the pulpit: an ancient copy of an early edition of the Presbyterian Church's Book of Praise, a small volume containing only the texts of the psalms and hymns therein. (The opening pages with the publication date are missing.) On the cover is the Burning Bush, the nearly half-millennium old symbol of the Reformed Churches. 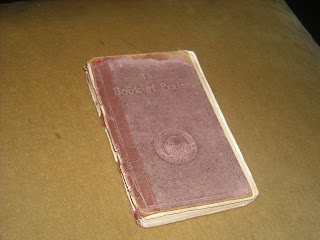 As I opened it, I was delighted to see the familiar opening words of Psalm 1 from the Scottish Psalter:

That man hath perfect blessedness,
who walketh not astray
In counsel of ungodly men,
nor stands in sinners’ way,
Nor sitteth in the scorner’s chair:
But placeth his delight
Upon God’s law, and meditates
on his law day and night. 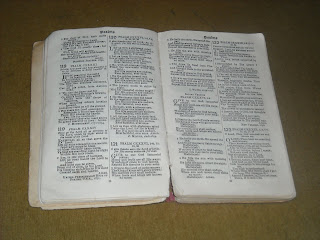 Although the metrical psalter does not include every psalm (e.g., it skips over Psalms 135, 137 and — incredibly — 138), it contains more than subsequent editions of the Book of Praise. The 1897 and 1902 editions each carry 122 versifications of psalms or parts of psalms, while the 1972 edition has only 68 such versifications, doubling some psalms and leaving out many more. However, lest one conclude that psalm-singing is on the way out in the PCC, the 1997 edition contains 108 psalms and psalm selections, a definite improvement over its predecessor. May psalm-singing once again flourish in the Presbyterian Church in Canada.
Posted by David Koyzis at 11:03