Chuck Colson's latest Breakpoint commentary raises an issue of concern to many Christians, at least in North America, where we have the luxury of time and energy to dispute such things: Worship Wars. Although his piece is subtitled "How Do We Determine Musical Excellence," he addresses the subject of music only in passing, mostly focussing on hymn texts. Citing one Donald Williams, he offers these criteria for evaluating worship songs: (1) biblical truth, (2) theological profundity and (3) poetic richness. I can agree with all of these, which derive from the following observation:

Much of today’s music is of poor quality, [Williams] writes. But so was some music written centuries ago. The difference is the old hymns have endured a centuries-long weeding-out process. If we hope to identify the best new music, Williams writes, we must know “those marks of excellence that made the best of the past stand out and survive so long.”

To be sure, poor-quality hymns have been written for centuries, and these are the ones that generally do not survive the passing of their own generation.

However, conspicuous by its absence in Colson's commentary is any reference to psalm-singing, which was standard throughout virtually all protestant churches until the 18th century and, in some cases, much later. If Williams is right about this "centuries-long weeding-out process," what accounts for the loss of metrical psalmody in so many communions? Surely the biblical Psalms were sturdy enough to survive this darwinian struggle?

I think three factors can be cited here. First, the influence of confessional liberalism during and after the 18th century made the Psalms seem primitive and unenlightened. With many professed Christians revising Jesus' status to that of a mere teacher of morality, there seemed little point in continuing to sing the psalms in church, as they seemed to do little in support of this new "enlightened" religion.

Second, at the Reformation there arose a kind of liturgical constructivism that made the church's liturgy seem endlessly revisable. The Reformed were more radical in this than the more liturgically conservative Lutherans and Anglicans. Although the nonlutheran Reformers sought to reform the liturgy according to their understanding of the teachings of scripture, their heirs often sought revisions either for the sake of mere novelty or to conform the liturgy to new ways of thinking.

In the 17th century Anglo-Celtic Presbyterians ill-advisedly moved away from set liturgies, allowing the minister or presiding worship leader to make up their own prayers as they saw fit. This was the point of the Westminster Directory of Public Worship, which had a subsequent influence in the later development of liturgical life in the free churches. Of course, this approach depends very much on the skill and confessional integrity of individual ministers. When these begin to waver, they take the church with them. 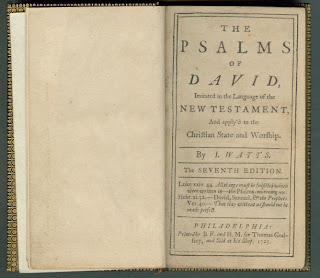 Third, because the Psalms were sung to verse, their quality was dependent on the skill of the versifiers. If the latter emphasized literal accuracy at the expense of comprehen-sibility and literary grace (e.g., the Scottish Psalter), congregations would likely weary of trying to sing them at some point. By contrast, if the versifier emphasized literary quality at the expense of accuracy (e.g., Isaac Watts), there was always the danger of imposing one's own understanding and interpretations on the metrical versions. At that point the boundary between versifier and hymn-writer became fuzzy indeed, and the psalms were eventually abandoned for the more popular hymns of Watts, Wesley and many others.

But what of the role of music? Here's Colson again:

A fourth mark is musical beauty. In great music, “there are certain contours, structures, and cadences that make for a singable melody.” And the right harmony “can make that melody more memorable . . .,” [Williams] writes. For instance, “Be Thou My Vision” “rises and falls like an ocean wave or a sine curve.” Tragically, Williams notes, “more recent praise choruses seem to ignore all the rules of good composition, giving us not well-shaped melodies but just one note after another.”

It is not a simple matter to articulate the norms that make for great music, although I think it would be the height of folly to suggest from this that norms do not exist. I'll come back to this at some point, because the issue deserves separate treatment.
Posted by David Koyzis at 15:23