The Genevan Psalter is now available in its entirety in the Spanish language from Faro de Gracia. Here is the description from R. Scott Clark's Heidelblog: 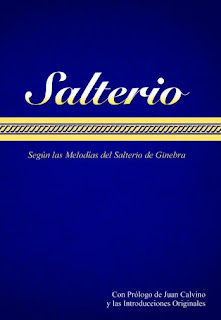 It contains the 150 Biblical Psalms, complete and entire, and versified to be sung with the Genevan Psalter tunes. It contains a translation of John Calvin’s preface, and the introductions to each Psalm which appeared in the original French psalter. The guiding principle of the work has been to remain as close as possible to the Biblical text of the Spanish Reina-Valera translations of 1909 and 1960, in such a way that the Biblical text will be completely recognizable to everyone, in spite of the formal requirements of the versification.

This project has taken us seven years of constant work and revision. We do not conceal the satisfaction it gives us to see it now published, above all because the goal is nothing other than the public worship of the Lord by His church. We hope, then, that with it historic protestant worship can be recovered in the Spanish-speaking evangelical churches, an issue of immense importance in our day.

I've not yet seen a copy, so I cannot say whether there is a relationship between this new publication and the Spanish-language psalter found here. I will let readers know when I do.
Posted by David Koyzis at 14:45