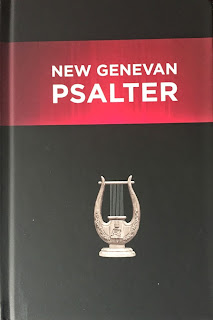 Only one North American church denomination sings the complete Genevan Psalter today. This is the small federation of congregations that calls itself the Canadian Reformed Churches. Its origins can be traced to a tragic split that occurred within the Gereformeerde Kerken in Nederland (Reformed Churches in the Netherlands) in 1944, during the final year of the German occupation. The dissenting group called themselves the Gereformeerde Kerken vrijgemaakt, or the Liberated Reformed Churches. After the war, the members of this group emigrated from their homeland and established their own churches in Canada, Australia and New Zealand.

Although there were other earlier Dutch Reformed migrations, the Liberated Reformed alone managed to bring the Genevan Psalter with them and to hold on to it. When the Christian Reformed Church switched to English around the time of the Great War, they largely adopted the 1912 Psalter of the United Presbyterians rather than attempt to translate into English the entirety of the Genevan Psalter, from which they had sung since the 16th century. The 1912 Psalter is more obviously indebted to the tradition of English and Scottish psalmody, with their regular metrical patterns, whereas the Genevan Psalms are rendered in a wide variety of irregular metres.

In 1984 the CanRef churches published their Book of Praise, misleadingly subtitled "Anglo-Genevan Psalter." (The historic Anglo-Genevan Psalter was published in the mid-16th century by the English exiles in Geneva and was one of the predecessors of the Sternhold & Hopkins Psalter.) Its visual layout followed the example of the Dutch psalters, carrying only a melody line and placing a treble clef only on the first line of music rather than on every line, which is the usual practice. (My 115-year-old copy of Jiří Strejc's Czech Psalter does the same thing.) The texts were rendered in somewhat awkward English and persisted in the use of the old Jacobean pronouns ("thou," "thee," "thine," &c.) in addressing God.

Five years ago the CanRef Churches published an Authorized Provisional Version of a revised Book of Praise, including all 150 Genevan Psalms and 85 canticles and hymns. Now this collection has been finalized and is being used by the churches. Along with the Book of Praise, Premier Printing in Winnipeg has published a New Genevan Psalter, which includes the 150 Psalms and four biblical canticles. The denominationally-specific material, such as creeds, confessions and liturgical forms, has been left out to make it more attractive to other, non-CanRef churches that would like to sing the Genevan Psalms.

Once again the visual layout is identical. There have been some changes from the provisional version to this final collection, such as the adoption of American spellings. A few of the texts have been altered, e.g., the first two stanzas of Psalm 90 have been condensed into a single stanza, thus making for a total of eight stanzas rather than nine. This collection has abandoned the Jacobean pronouns, but it retains the traditional rhyme schemes, which poses an obstacle to smooth translation of the Psalms. I will reiterate what I wrote four years ago about the provisional version, because it still applies to the final version:

[T]he major difficulty with these versifications, as I see it, is that they stick rather too closely to the rhyming schemes of the original French texts, which, oddly enough, do not always fit well with the tunes. This often leaves the stressed long notes coinciding with unstressed syllables or even short words like "the" and "to." This is not peculiar to the BOP, but is characteristic of every translation of the Psalms of which I am aware, including Lobwasser's German, Strejc's Czech, Molnár's Hungarian and the 1773 Dutch psalters. Moreover, masculine (stressed) and feminine (unstressed) endings in the text do not always match the masculine and feminine endings in each line of the music. Together these make for somewhat awkward singing and may in part explain why the Genevan melodies did not catch on in English-language psalters.

Nevertheless, despite these limitations, this collection may represent the best that can be done with the Genevan Psalms in English, short of abandoning the traditional rhyme scheme and going with different schemes or no rhymes at all.
Posted by David Koyzis at 18:18

I know they make a big deal about unison singing, but I find it really unfortunate that they only include the melody line.

Besides the BOP, is this the only in-print edition of the Genevan Psalms in English available in North America? Well, it's a start, I guess.

Thanks, Gregory. I will post a follow-up on musical arrangements. In answer to your second question, I believe this is the only complete English-language edition available today. If I live long enough, I might manage to complete my own Genevan Psalter project, but that's by no means a certainty.

Baus, a variety of sheet music is available online, much of it free, and has been listed here: http://anniekateshomeschoolreviews.com/2015/03/introducing-the-new-genevan-psalter/

David, thanks for sending me the link to your site. I'm adding it to the resources section of my introduction to this psalter. I'm sorry that I missed listing it before. It is is a great resource and I pray God will bless your work.

Thanks so mucy, Annie Kate.