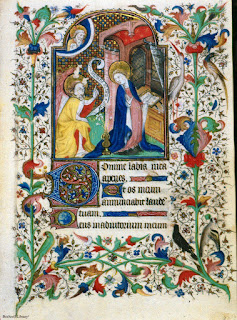 Nearly forty years ago, I discovered the practice of daily prayer when I purchased a copy of Herbert Lindemann's The Daily Office in the bookstore at Luther Seminary in St. Paul, Minnesota. Since then I have prayed through the Psalms on a regular basis and through the Bible itself using the Daily Office Lectionary published originally in the 1979 Book of Common Prayer (BCP) of the Episcopal Church (United States) and subsequently republished in the hymnals and worship books of other denominations.

The major difficulty with this lectionary is that it does not prescribe reading through the entire Old Testament, instead taking the reader only through key highlights. I followed this for a number of years but then grew dissatisfied with this approach. So I decided several years ago to maintain the lectionary for the New Testament but with the Old to follow a lectio continua, or simply to read the entirety in course, which would take anywhere from between two and a half years to as many as five, depending on whether I included the Apocrypha or on whether I actually read an entire chapter each day. In this fashion I would read the whole of scripture over an indefinite period of time.


I had never gravitated to the various commemorations of the saints, which interrupted both the church year and the lectio continua. So in effect I was following the seasons of the church calendar in the New Testament readings but not in the Old Testament. I made a major change over a decade ago when I moved from reading one or two Psalms per day over the course of some months to adopting the BCP pattern of praying through the Psalms every 30 days, something I continue at present.

In March, after I lost my job, my daily prayer regimen collapsed, though by no means did I stop praying. If anything, (sometimes anguished) prayer filled my waking hours. After some months, however, I picked up my previous regimen, but with a notable change: I have now largely put aside the Daily Office Lectionary and am reading through both testaments based on a lectio continua. I read a chapter from the New Testament at morning prayer and from the Old at evening prayer. This represents a major shift in my ongoing conversation with God. The basic pattern is still Benedictine in character, but I am now taking more seriously the canonical order of the books of the New Testament, moving through the four gospels and the Acts, to Paul's letters, the non-Pauline letters and finally the Revelation.

I cannot yet say what the outcome of this will be in my own life and in the lives of the people God has given me to love. But I do believe in heeding the whole counsel of God, which means attending closely to his word. When we read only snippets or (a fancier word!) pericopes from scripture, we may miss the arc of the larger redemptive narrative. The Bible is a very long book, of course, and it takes time to get through. Many Christians  may never have read it from start to finish. But doing so, especially in a communal context, will open us to the incomparable riches of God's grace as communicated in his word.

You have inspired me. Or God has inspired me through your writing of this post. My resolution for 2018 is now to read through "Biblio" (the Esperanto version of the Bible containing the Catholic deuterocanonicals in situ) in one year. I think I have read the entire Bible in English, but never in order and pretty much without discipline for the most part. As I approach my 64th birthday in March, I feel a need for more discipline, and what better place to begin to develop it than in the scriptures? https://www.facebook.com/leland.ross/posts/10215242976853581

That's great, Leland. I'm happy to hear of it.

Keep it up. I'm sure it will bear fruit. Last spring, I decided I needed to read the whole Bible, in order, start to finish. I began with the goal of finishing in a year, but was actually able to finish in slightly less than 9 months. I have now chosen a new translation and started over. On this second full reading, I'm starting to make connections and gain new insights that wouldn't have come from lectionary readings alone. I have also noticed that having a greater familiarity with the rest of the Old Testament has deepened my understanding of the Psalms.

Wonderful! Every time I reread the Bible, I see new things that I missed before.