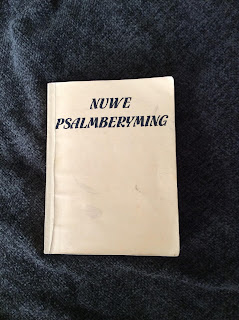 Not long ago my good friend Lucas Grassi Freire, who translated my first book into Portuguese, sent me a copy of the Nuwe Psalmberyming, a new versification of the 150 Psalms in Afrikaans published in 2001. Much as the Dutch Interkerkelijke Stichting voor de Psalmberijming had had multi-denominational support in revising the texts for the Psalms in 1968, so this project in South Africa was supported by four Reformed church bodies, including the large Nederduitse Gereformeerde Kerk (about 1 million members), the Nederduitsch Hervormde Kerk van Afrika (130,000 members), the Afrikaanse Protestantse Kerk (35,000 members) and the Gereformeerde Kerke in Suid-Afrika (100,000 members), the last of which is associated with what used to be called Potchefstroom University west of Johannesburg and which once had a close relationship with the Christian Reformed Church in North America and the former Gereformeerde Kerken in Nederland.


Unlike the revised Dutch Psalter of half a century ago, the Nuwe Psalmberyming makes use of other tunes besides those in the 16th-century Genevan Psalter. By my count only 73, or just under half, of the Psalms are sung to Genevan melodies. Three (Psalms 18, 91 and 145) are set to tunes from Strasbourg, Lyon and Lausanne, and are structurally and musically very similar to the Genevan tunes. The remainder of the Psalms are set to other melodies. The vast majority of the texts are the work of the well-known South African writer and poet, T. T. (Theunis Theodorus) Cloete (1924–2015), who, during his life, seems to have become the new Totius, the first to set the psalms to verse in Afrikaans some eight decades ago. The texts appear to follow the rhyming schemes used in Geneva, not all of which necessarily work well in other languages. Some of the Psalm texts have two tunes, while some of the Genevan tunes in this collection do not necessarily match the numbered Psalm with which it is paired in the original 1562 psalter. 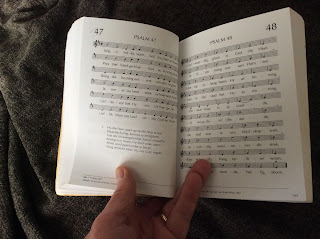 The visual layout of the Genevan Psalms follows the tradition of the old Dutch psalters whereby the treble clef appears only in the first line but is absent in successive lines. In fact, this is an easy way to tell which of the Psalms uses a Genevan tune and which does not, as seen at left. Moreover, the non-Genevan tunes are divided into conventional measures while the Genevan tunes are not, perhaps reflecting the mediaeval chant notation still familiar in the 16th century.

This collection is powerful evidence that the tradition of singing Genevan psalmody continues to live on at the southern tip of the African continent, though the fact that Afrikaans is not a major world language may limit the spread of of this practice elsewhere in Africa.
Posted by David Koyzis at 15:35