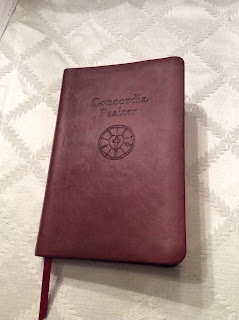 Although this blog is devoted primarily to the singing of metrical psalmody, it is appropriate occasionally to highlight an excellent prose psalter, especially one designed for liturgical use. The Concordia Psalter is one of these and merits close attention. Concordia Publishing House of St.Louis is the publishing arm of the Lutheran Church-Missouri Synod, whose Canadian branch is known as the Lutheran Church-Canada. This is the denomination that sponsors The Lutheran Hour, the decades-old radio broadcast that has aired weekly since 1930. Over the years, Concordia has published top-quality devotional materials, including Herbert Lindemann's out-of-print classic, The Daily Office (1965), which had a profound impact on my own prayer life when I first discovered it in the late 1970s. More recently, Concordia produced a Treasury of Daily Prayer, an oversized volume enabling individuals and families to pray the Daily Office in their own homes. (Its sheer heft would prevent them using it elsewhere!) 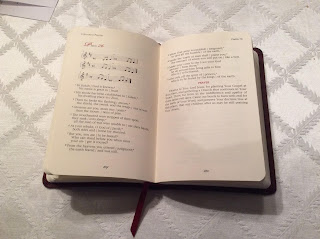 In 2015 Concordia published the Concordia Psalter in a smaller and more portable format than that of the Treasury. The Psalms are taken from the English Standard Version of the Bible, which is a light updating of the Revised Standard Version published at the beginning of the century. The texts are pointed for chanting, and each psalm is preceded by two chant tones, enabling one to sing the texts. The longer psalms are divided into sections each of which is preceded by chant tones. For Psalm 119, this means that there are different chant tones for each of the 22 sections represented by the letters of the Hebrew alphabet. While Reformed Christians, sadly, have not generally been known for chanting the psalms, Lutherans have commendably retained this practice from the ancient church, even as Luther himself composed metrical paraphrases of the Psalms, including Ein' Feste Burg (Psalm 46) and Aus tiefer Not (Psalm 130). The Gloria Patri, which traditionally follows the singing of psalms, is pointed for chanting near the beginning of the volume (p. 8). Each psalm or psalm section is followed by a brief prayer or collect. 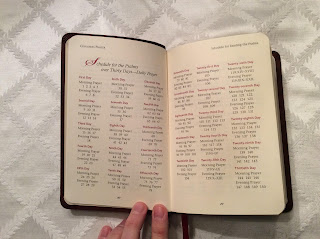 According to ancient tradition, all 150 Psalms are sung over a specific period of time during the Daily Office. St. Benedict, in his famous Rule, prescribed that they be sung over the course of a week (Rule of St. Benedict, 18). While this is undoubtedly too ambitious for most Christian communities, the Concordia Psalter includes a schedule for singing them over a two-week period during the seven daily prayer hours of vigils/matins, lauds, terce, sext, none, vespers and compline (pp. 12-14). Nevertheless, outside of the monasteries, few communities are likely to follow all these prayer hours. Thus the Concordia Psalter also offers two plans for praying through the Psalter over thirty days. One of these is the plan prescribed by the Book of Common Prayer for morning and evening prayer (pp. 10-11; see photograph at right), which I myself have followed for a little over a decade.

If there is one drawback to this volume, it is that it does not easily lie flat. It ought to be an iron-clad rule that all liturgical books lie flat when open. This would enable the worshipper to fold his hands and focus on God rather than on trying to keep the book open in front of him. Now I have found that, after turning to a page and bending the book backwards, it will lie open at that spot for a time, but whether the binding is strong enough to put up with such treatment over the long term remains to be seen.

Christians should definitely be praying and singing the Psalms. Concordia Publishing has produced an excellent volume that deserves wide usage, even outside the community of Lutheran Christians.