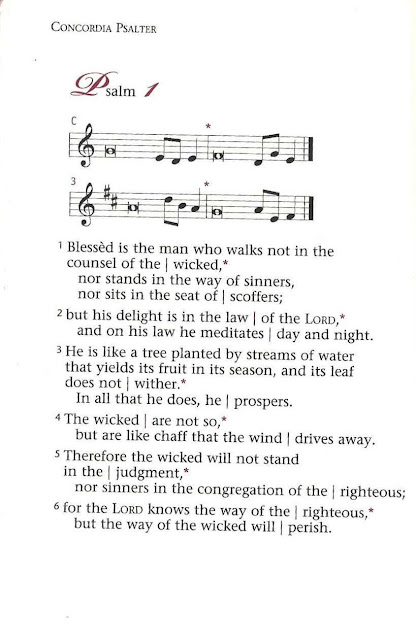 I thought I had said everything that needed to be said in my review of the Concordia Psalter nine days ago, but now that I am taking a closer look at it, it seems appropriate to comment on its usability for actually chanting the Psalms. As I mentioned then, the collection contains a number of tones for chanting. Although chant can be quite complex, containing multiple melismata in quick succession, the chant tones offered here are quite simple and, with practice, can be easily sung by a congregation and certainly by a competent choir. As far as I can tell, the pointing of the Psalms is the same in this volume as in the Treasury of Daily Prayer and Reading the Psalms with Luther (2007), both Concordia publications.


The sample at the right shows the pointing of Psalm 1. Notice that the major portion of the first line is, of course, chanted on a single note, in this case G above middle C, while the three final notes, not generally assigned note values in traditional chant notation, are used in singing the portion after the vertical line in the text. Here they are represented by two eighth notes followed by a quarter note. The second line in the text is then sung to the portion after the bar line in the music in similar fashion. In this case the entire two-bar line is repeated in the next stanza of text, continuing either to the end of the Psalm or until a break when a different chant tone is introduced for the next section.

Now having tried to chant several of these myself, I am coming to conclude that the vertical line in the text comes too late in the phrase. If I were pointing the psalm, I would place the vertical line between "counsel" and "of the wicked." Because the final word has a feminine (that is, unstressed) ending, it would seem appropriate to sing "wicked" to a single note. (The Scottish Psalter of 1650 does something similar when the end of a line has a feminine ending.) So in the second phrase I would place the vertical line before "seat of scoffers." The next two phrases I would leave alone, but once again in verse 3 I would put the line before "does not wither." The psalm would thus look like this:

Blessed is the man who walks not in the counsel | of the wicked,*
nor stands in the way of sinners, nor sits in the | seat of scoffers;
but his delight is in the law | of the Lord,*
and on his law he meditates | day and night.
He is like a tree planted by streams of water that yields its fruit in its season, and its leaf | does not wither.*
In all that he | does, he prospers.
The wicked | are not so,*
but are like chaff that the wind | drives away.
Therefore the wicked will not stand | in the judgment,*
nor sinners in the congregation | of the righteous;
for the Lord knows the way | of the righteous,*
but the way of the | wicked will perish. 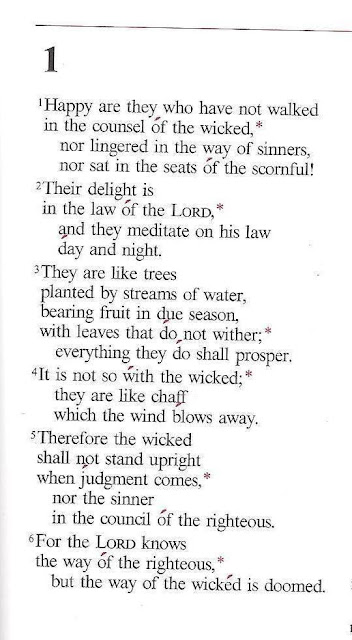 In the Concordia Psalter's pointing, there are several melismata requiring singers to chant more than one note on a single syllable of text, usually the last-but-one.

By contrast, take a look at the same psalm as rendered in the 1978 Lutheran Book of Worship (left). The translation is that used (and perhaps originated) in the 1979 Book of Common Prayer used in the Episcopal Church in the United States. The way it is pointed here appears to follow the principle I described above and is similar to my own pointing, with the word containing stressed and unstressed syllables being sung to a single note. To my ears, this sounds more pleasing, and I rather think most people would find it easier to sing.

Now I have to confess that I am not a professional musician, nor am I an authority on chant. I will readily acknowledge that some might disagree with me here. Given that my own interest is in metrical psalms, especially the Genevan Psalter, I will probably not touch on chanted prose psalms very often in this blog, but I think it is worth encouraging Christians accustomed to metred versions to consider incorporating chanted psalms into their worship.